A Renovation That Changed Everything 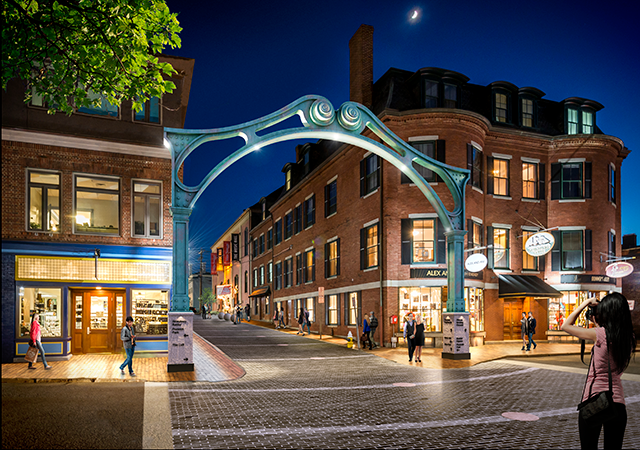 The Chestnut Street renovation was first proposed by The Music Hall in 2009 as a 50/50 partnership with the City of Portsmouth. Its aim was to improve pedestrian and emergency access to the street, create gathering spaces, and connect a pedestrian-friendly corridor from The African Burying Ground Memorial to the Northern Tier. This plan, along with the gift of public art in the form of a wayfinding archway, was approved by a unanimous vote of the Portsmouth City Council after public listening sessions, work with city committees, and Art-Speak’s approval.

“Successful completion of a beautifully designed arch could set a positive precedent for future public art projects aimed at creating pedestrian friendly place-making spaces that connect neighborhoods across the city.”Art-Speak Project Planning Committee Report Back to the City Manager

The Music Hall gave a gift of public art to the City of Portsmouth. By fully funding the design, construction, installation, and a maintenance fund for The Chestnut Street Arch, The Music Hall will raise awareness and pay tribute to Portsmouth’s architectural heritage. The historic structures of Portsmouth feature hand-carved elements that have inspired this arch, such as a building’s threshold; the organic curl of a furniture pediment; even the nuts, bolts, and rivets of Seacoast bridges and maritime vessels. As a leading cultural institution in Portsmouth, The Music Hall values their role in promoting arts and culture, honoring the collective history of the Seacoast, fostering good public-private partnerships, and creating a sense of place. This project excels in all these capacities.

The Music Hall is pleased to have worked so closely with the City (City staff, Parking, Traffic and Safety, Trees and Greenery, the Historic District Commission) and Art-Speak, to hear their input and gain their insight on this during this project’s review phase. The Streetscape and arch design are better as a result of this collaborative work.

The Music Hall, as part of its ongoing Treasure the Future Capital Campaign, continued its mission of renovation, restoration, and revitalization projects by upgrading the exterior of the historic theater with:

This project is separate from the upgrades to the street and along as with the Arch, was completely funded by The Music Hall’s Capital Campaign.

The Project Consists of: