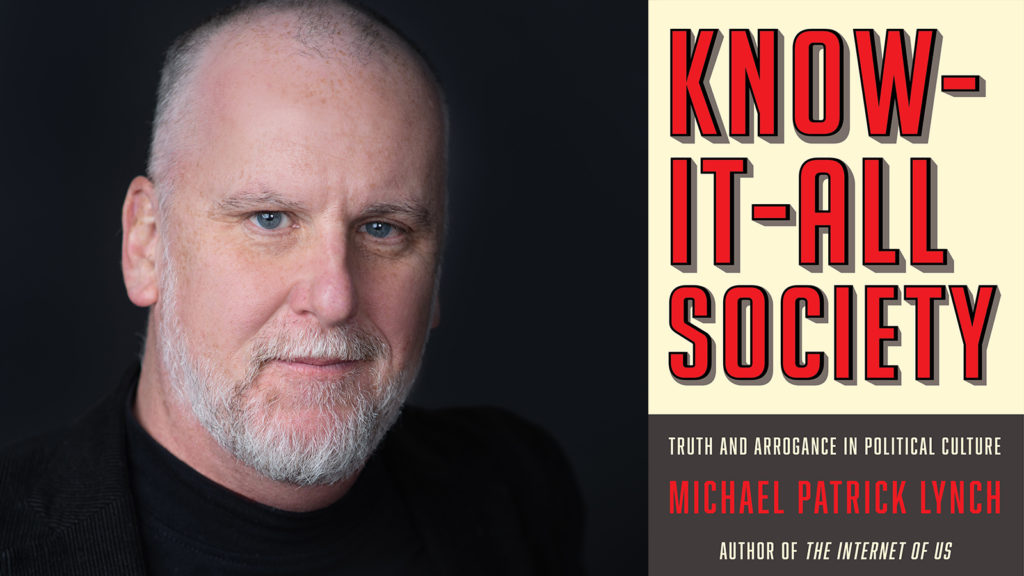 The “philosopher of truth” (Jill Lepore, The New Yorker) returns with a timely critique of our culture’s narcissistic aversion to admitting when we are wrong. With moderator Ian Aldrich, from Yankee Magazine.

Taking stock of our fragmented political landscape, celebrated philosopher and TED speaker Michael Patrick Lynch argues that we are becoming a culture of dogmatic know-it-alls. The spread of what Lynch calls “epistemic arrogance” makes us think we have nothing to learn from one another, rewards an unbending commitment to one’s own opinions, and glorifies a defensive rejection of those who are different. Synthesizing years of research, Lynch offers a philosophical perspective on this crisis of arrogance in the age of the Internet. Delving deeply into three core ideas―overconfidence in our knowledge, the politics that feed off this tendency, and the way our social media encourages the supposed “end of truth”―Lynch offers solutions for how we, individually and collectively, can reverse this dangerous trend. A bracing and thought-provoking work, Know-It-All Society holds a mirror up to American culture and reveals the sources of our fragmentation to launch a powerful argument for the value of humility.

Michael Patrick Lynch is the director of the Humanities Institute and a professor of philosophy at the University of Connecticut. His previous books include True to Life, an Editor’s Choice by the New York Times Book Review. A highly sought-after speaker around the world, he has appeared at such venues as TED and The Nantucket Project. A recipient of the Medal for Research Excellence from the University of Connecticut’s College of Liberal Arts and Sciences, Lynch has held grants from the National Endowment for the Humanities and is a frequent contributor to the New York Times. He lives in Storrs, Connecticut.

The "philosopher of truth” — Jill Lepore, The New Yorker