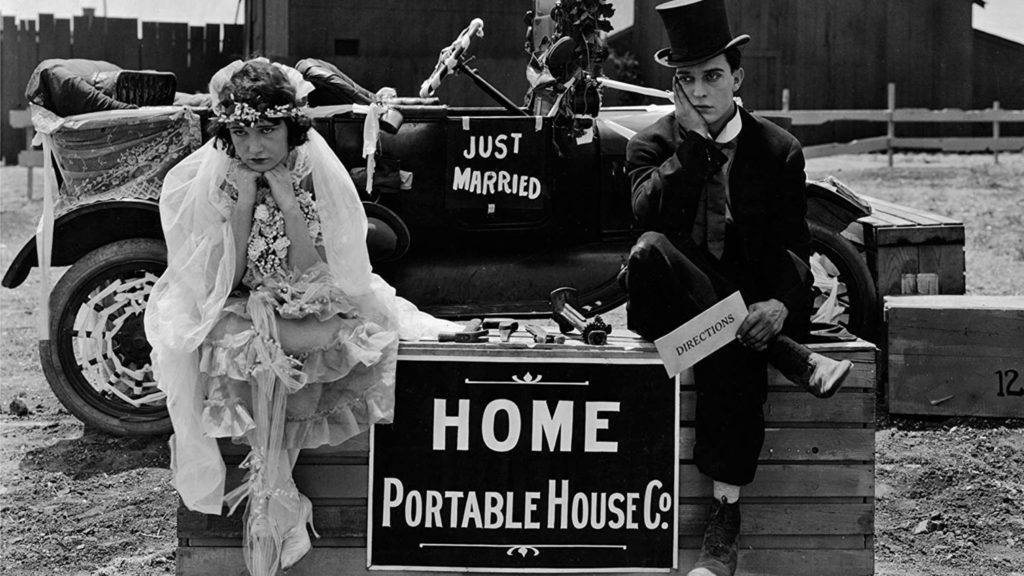 Travel back to the Golden Age of silent films, as the Oyster River Middle School Jazz Band accompanies the classic 1920 Buster Keaton “two-reeler” One Week. Silent movies have always been far from silent. During the Roaring 20s, silent movies were presented regularly at The Music Hall, accompanied by a live orchestra in the pit. Oyster River Middle School Jazz Band recreates this historic experience with a spine-tingling 80-piece orchestra, playing in the glow of stand lights below the screen.

Buster Keaton’s 1920 two-reeler, One Week, was the first film that Keaton directed. The plot’s conflict will be immediately understandable to anyone who has ever assembled a piece of IKEA furniture. A bride and a groom receive a build-it-yourself house kit as a wedding gift. (At the time of filming there were 15 house kits available in the Sears and Roebuck catalog, ranging from $191- $5972!) Secretly, a rejected suitor renumbers the parts. Things go from bad to worse when the newlyweds realize that they have built their house on the wrong site. Undaunted, the blissful couple sets out to move it themselves, They just need to get it to the other side of the railroad tracks…

Following One Week, the Oyster River High School Studio Orchestra will perform as the live accompaniment to a new movie, Under One Sky, which was just performed by 52 Oyster River High School students in Chengdu, Xi-an, and Beijing, China. The film was created by David Ervin for the Cultural Exchange Trip to China organized and greatly underwritten by the Confucius Institute at the University of New Hampshire.