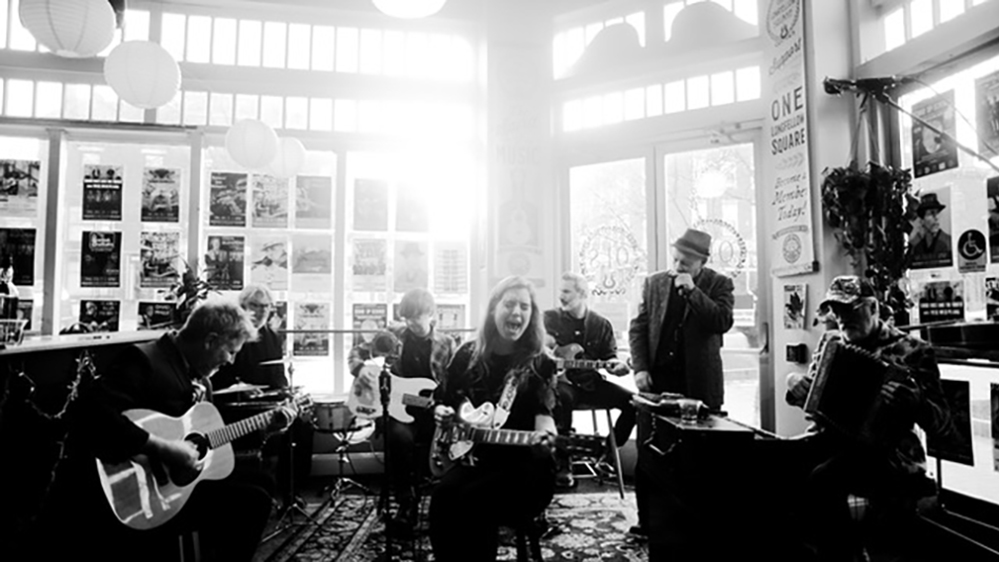 The collaboration between Session Americana and Ali McGuirk is a perfect blend of jazzy smooth silk and raucous folk-rock intertwining to produce a jubilant explosion that shines brilliantly. Session Americana performances have always felt like the reunion of old friends sitting around a table sharing stories, songs, and a few beverages. The addition of McGuirk to the sound lends itself to that familiarity and mutual admiration between artists at the peak of the roots music community. The band is fluid and the energy is electric. Moving between Session Americana’s dense catalog of originals, new arrangements of Ali’s songs, and covers of all sorts, this show is an effortless blending between genre and voices, collecting together to form something new and beautiful.

Ali McGuirk was one of Boston’s best-kept secrets. That is, until 2016, when Boston Globe rock critic Steve Morse selected her, along with Lake Street Dive and Haim among others, as must-hear artists. Now the cat’s out of the bag, as they say, and the critical praise has been non-stop ever since. McGuirk’s been riding that momentum, releasing a self-titled EP followed by her full-length album Slow Burn. Both earned her top spots on several music lists and in 2017 a Boston Music Award Nomination for Best New Artist.

To All:
Saturday, May 4
The B2W Box Office opens at 10am for walk up sales; phone & online sales begin at noon.

"It's right there in the name for this ultra-gifted, rotating collective of singers and multi-instrumentalists. And sprawl is a good word when it comes to the Boston-based group's raucous live shows, which were initially built around the community concept of traditional Irish seisiúns. The group, whose members have played with a variety of acts including Patty Griffin, Josh Ritter and the J. Geils Band, expertly blends vintage American roots music styles — from country to jazz to rock — in a rowdy but deft fashion." - Rolling Stone