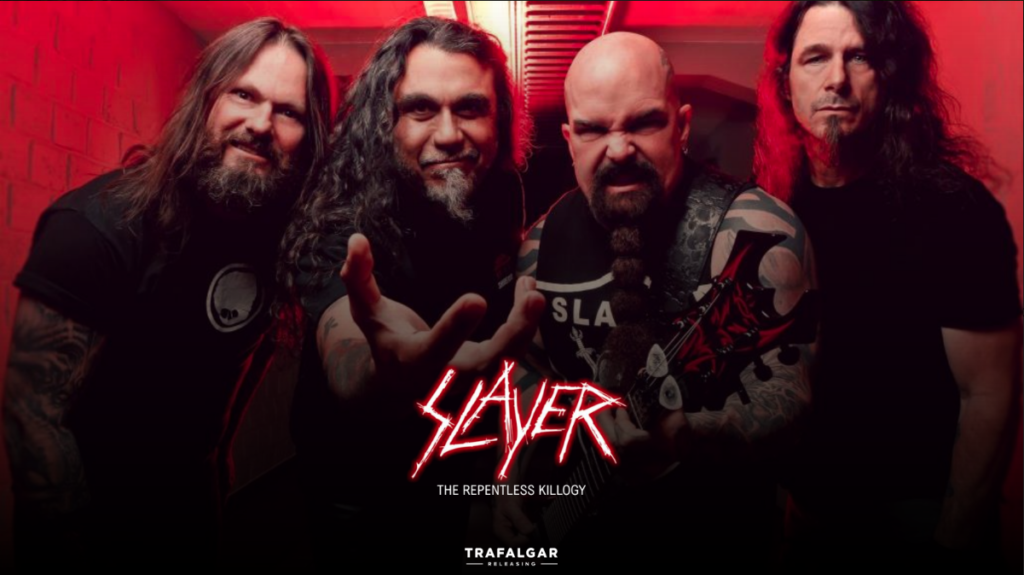 For nearly forty years, Slayer’s onslaught has proven them to be the supreme thrash-metal band on the planet – the band that other heavy acts are measured against and aspire to. With their place in music history secure, Slayer — Tom Araya, Kerry King, Gary Holt and Paul Bostaph — in conjunction with Trafalgar Releasing, Nuclear Blast Records and Prime Zero Productions, will unleash the Slaytanic offensive on the big screen when Slayer: The Repentless Killogy debuts in movie theaters around the world on November 6, 2019.  Uncompromising and unmissable, this one-night-only event will feature a short film paired with Slayer’s entire performance filmed at its August 5, 2017 concert at the Los Angeles Forum as well as a cinema-exclusive welcome from the band captured from the South American leg of their Final World Tour.

The Repentless Killogy motion picture begins with the powerful short narrative film that brings together the music of Slayer and the grisly story they wanted to tell. Revenge, murder, bloodshed and retribution.  Slayer: The Repentless Killogy short film was written and directed by BJ McDonnell, who conceived and directed the three brutal music videos – “You Against You,” “Repentless,” and “Pride in Prejudice”-  for Slayer’s final studio album Repentless (2015).

Part two of The Repentless Killogy features Slayer’s entire live set performed at the Los Angeles Forum on August 5, 2017, and was directed by Wayne Isham.