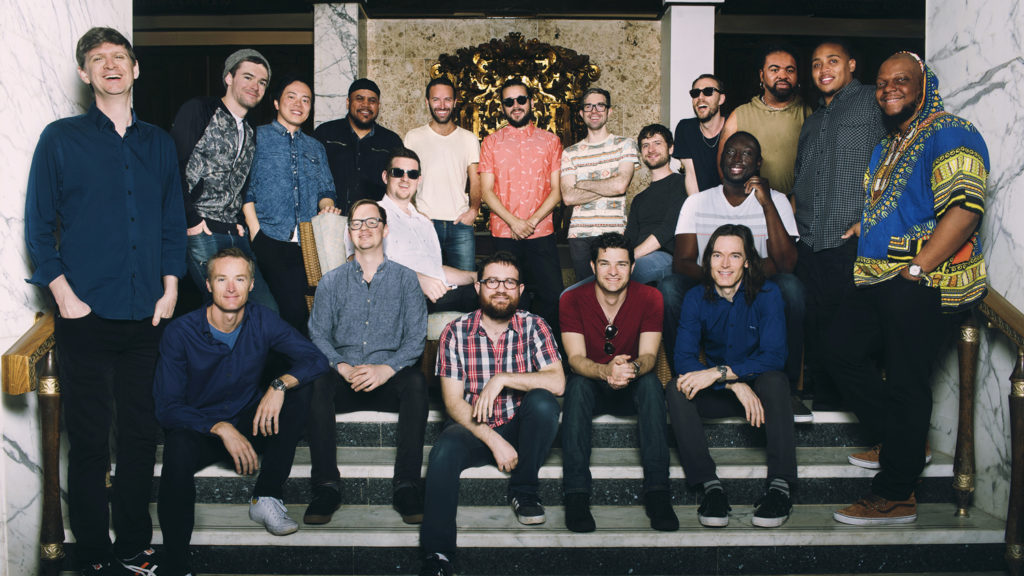 “Many artists have attempted to bring jazz, kicking and screaming, into the modern age. Snarky Puppy, a loose collective from New York by way of Texas, makes it look effortless.” — SF Chronicle

Displaying a rare and delicate mixture of sophisticated composition, harmony, and improvisation, fusion-influenced genre-bending Snarky Puppy make exploratory jazz, funk, and rock. Formed in Denton, Texas in 2004, Snarky Puppy features a wide-ranging group of over 30 musicians affectionately known as “The Fam” centered around bassist, composer, and bandleader Michael League. They each maintain busy schedules as sidemen (with such artists as Erykah Badu, Snoop Dogg, Kendrick Lamar, and D’Angelo), producers (for Kirk Franklin, David Crosby, and Salif Keïta), and solo artists (many of whom are on the band’s indy label, GroundUP Music). Each live performance features a selection of 8-12 musicians from the rotating cast, ensuring that each show is different not only due to ever-changing set lists but also because of the various permutations of musicians.

As the category names for all three of the band’s Grammy® awards would indicate (Best R&B Performance in 2014, Best Contemporary Instrumental Album in 2016 and 2017), Snarky Puppy isn’t exactly a jazz band. It’s not a fusion band, and it’s definitely not a jam band. At its core, the band represents the convergence of both black and white American music culture with various accents from around the world. Japan, Argentina, Canada, the United Kingdom, and Puerto Rico all have representation in the group’s membership. But more than the cultural diversity of the individual players, the defining characteristic of Snarky Puppy’s music is the joy of performing together in the perpetual push to grow creatively.