Songwriters in the Round 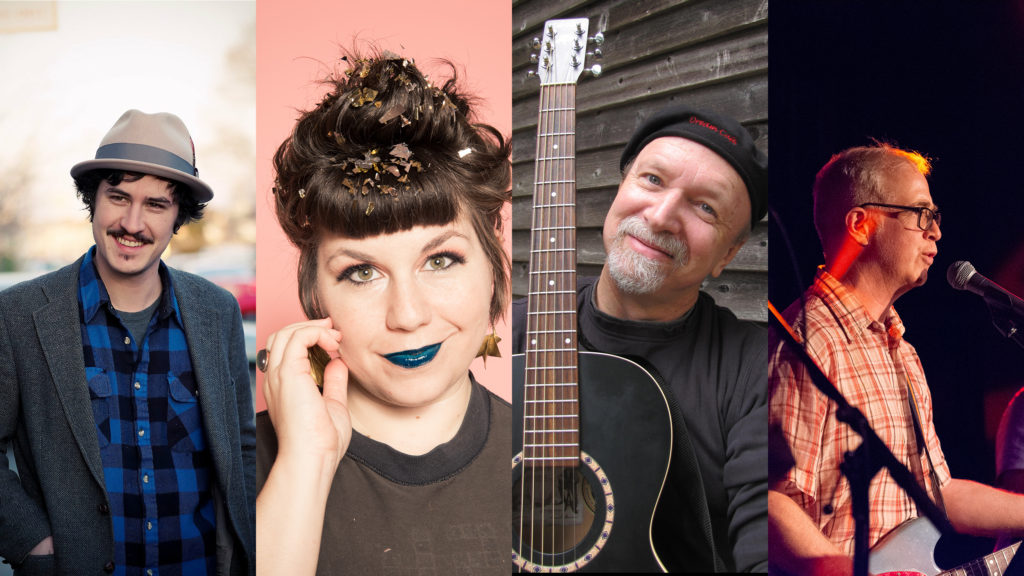 Jake Mehrmann (of Tan Vampires) grew up in New Hampshire playing music. He performed in the band Data based out of Manchester before moving to the Seacoast area. He wrote and recorded all the parts to an album as part of the RPM Challenge under the name Tan Vampires and then amassed a band with some of the best musicians from the area. Tan Vampires were singled out by the Boston Phoenix for its “Fifty Bands From Fifty States” and has amassed a quarter of a million plays on Spotify. They have opened up for Yo La Tengo, Deer Tick, Felice Brothers, and Okkervil River and Jake has done collaborations with various bands including Boston’s Moe Pope and Guy Capecelatro III.

Jocelyn Mackenzie is a Brooklyn-based singer, songwriter, percussionist, stylist, artist, and songwriting coach. Best known as the singing drummer from indie-pop trio Pearl and the Beard, she has a rich national and international touring history and has written music for film, television, and theater. In addition to her career as a solo musician, she is blossoming as a performer, writer, and curator in the theater world, including a role in the acclaimed touring production of Hundred Days, as a devising member of Trusty Sidekick Theater Company, and as Music Curator of the Puppet Playlist variety show. As a songwriting coach, her workshops have brought fun and practical writing tools to musicians of all skill levels in a variety of environments, including a collaboration with the New York Audubon Society. Her upcoming full-length album PUSH features songs about radical self-love composed solely for string quartet, voice, and percussion. She is proud to return to Portsmouth as a continuing collaborator within the WitR community.

Craig Werth is an internationally touring multi-instrumentalist songwriter who has captured hearts and minds across the world for his uncommon blend of musicianship, humor, wordcraft and insight into the human condition.  He has a talent for creating new songs that honor tradition and he delivers them with honesty and passion, most often accompanying his baritone voice with guitar, ukulele, octave mandolin, and banjo. Craig has composed songs and instrumentals for hospice, education, activism, humanitarian causes, and even for a “theme song” for a NASA space mission. Locally, Craig brings his teaching and music into his songwriting classes at Krempels Center for people living with brain injury, and to his service as an interfaith chaplain and pastor of the Nottingham Community Church (UU). www.craigwerth.com

Guy Capecelatro III is a lifelong musician who writes songs and plays in several bands in the Seacoast New Hampshire area. He returns to the Loft for the release of his new album. Guy picked up the guitar when he was 10 years old, allegedly “never getting any better at it” after 20-something years of playing. Between 1988 and the birth of his record label Two Ton Santa, Guy was in the bands Fancy Pants, Toast, Size of Guam, The Driveways, Up-a-Tree, Beekeeper, The Pants, Bob & Guy, and The Crotch Wax Menace, “and probably some others I’m forgetting as well,” he guesses.

Members
Saturday, January 5
The B2W Box Office opens at 10am for walk up sales; phone & online sales begin at noon.