Performing Songs from The Bromley House 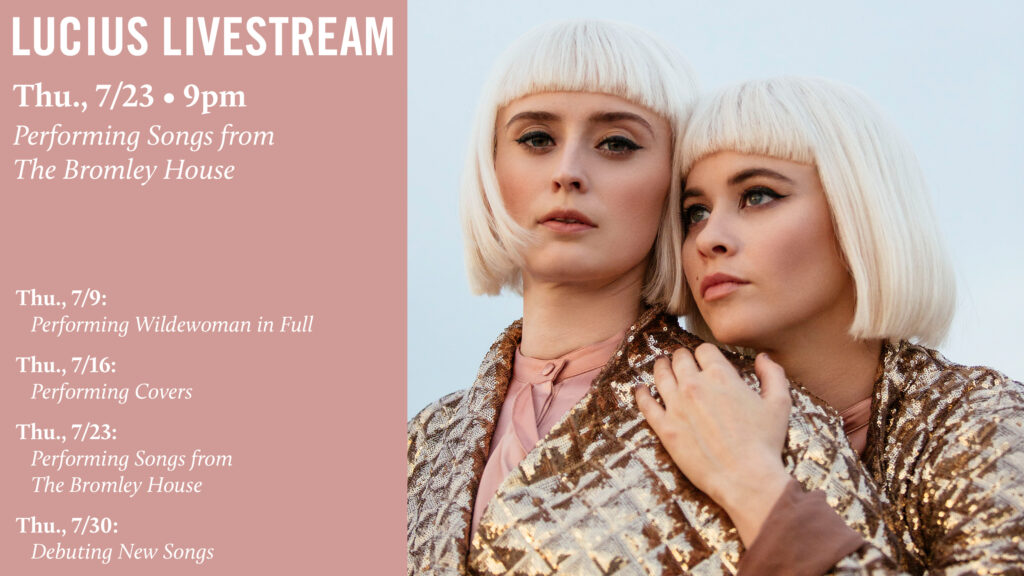 Be a part of Turning It Around: A Community Rebuilding Concert Series, a four-part series special with Lucius to raise funds for small businesses in Los Angeles facing financial hardship in the wake of COVID-19.

Thursday, July 23 at 9pm —Performing Songs from The Bromley House

After purchasing your ticket, buyers will receive a text and email 15 minutes before the livestream begins with a link to access the show. For customer support, contact: support@seated.com.

Every Lucius song is an act of enchantment, a spell cast by the indelibly harmonized voices of Jess Wolfe and Holly Laessig. Onstage, the performance becomes an invitation to bear witness to their transformation; the dance between two individuals becoming one voice, one vision, drenched in glitter and bound by psychic symmetry. And while the effect of this spectacle is hypnotic and gloriously strange, the songwriting continues to be the hand that reaches out from behind the curtain to hold the audience.

Nudes, a collection of acoustically driven songs showcasing their otherworldly harmonies, is the latest output from a collaboration first formed when Wolfe and Laessig met at Boston’s Berklee College of Music. After graduating, the duo moved to Brooklyn where they rounded out their lineup with Dan Molad and Peter Lalish and make their debut with 2013’s Wildewoman. Their sophomore album Good Grief arrived in 2016, encompassing everything from glitzy rhythmic pop to songs channeling the charm and crushed innocence of ’60s girl groups. Landing on various best-of-the-year lists, Good Grief attains a certain transcendent vulnerability.

Now residing in Los Angeles, the band has built an extraordinarily loyal following through the years. At the same time, they’ve earned the feverish adoration of their fellow musicians, with Wolfe and Laessig lending their vocals to albums by artists as eclectic as Nathaniel Rateliff, Sheryl Crow, Harry Styles, John Legend, and most recently, Ozzy Osborne.

Four-Show Streaming Pass
$50 (To purchase a pass to all four performances, click here.)

On Sale To All