The Music Hall is fortunate to have a circle of friends who have pledged their support in the form of planned or legacy gifts that will fund our activities for years to come. To recognize their interest in ensuring our continued vitality and relevance, we created the 1878 Legacy Society, named for the year our storied Hall was built. Dennis Fink, one of our initial Stakeholder members and a member of the 1878 Legacy Society, shared his thoughts on planned giving.

Tell us a little bit about yourself and your involvement with The Music Hall.
I grew up in the Seacoast area and attended Berwick Academy. When I retired, my parents were still living in South Berwick, so I wanted to come back here. When we moved north, my wife Mary and I were actively looking for a theater to attend. When I first became involved with The Music Hall, I contributed to the Treasure the Future capital campaign, but at that time I was also aware of annuities and decided I’d like to set one up. At that time the prime place you could establish an annuity was with New Hampshire Charitable Foundation so that’s what we did. I’ve been very happy with the annuity; I’ve had no trouble at all. 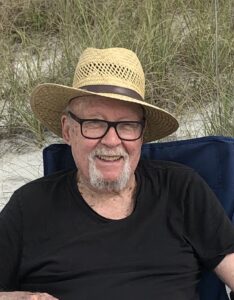 How did you first get introduced to The Music Hall? What drew you to become a Music Hall member?
In early days when there were just a few Stakeholders – I think I was number 15 – we would gather every fall at someone’s house and Patricia Lynch would show a slideshow of the upcoming events planned for the next 12 months. We’d get an early idea of what the shows were going to be and it was fun to have just a small group meeting at somebody’s house. I also knew some of the Directors, like Jamie French, quite well. During the last years when my wife was coming to The Music Hall, she had trouble getting out of the car and into the elevator. One of the Directors, David Hills, would meet us at the door of the Historic Theater before a show, help Mary in, and park the car. Then have it ready, and warm! at the corner after the show was over.

One of my favorite shows was seeing Chris Botti. Joyce Tucker and I wanted to go—the show was completely sold out except two seats in the second row. We weren’t sure about being so close to the stage—we wondered if we’d be able to see anything, but we bought the tickets. Before the evening was over, Chris Botti was standing right in front of us playing. I’ll never forget that. At another show, the show was over and the performer had taken encores and the curtain was closed, then the curtain parted and she came out and sang even a couple more songs! It’s been a fun and very pleasant experience to be associated with The Music Hall. At my tender age, I’m not going to things quite the way I used to, but I went to three seasons of the opera and to a lot of movies as well.

What are some of the ways people can support the organization via a Planned Gift?
When I first became involved with The Music Hall, I contributed to the Treasure the Future capital campaign. But at that time I was also aware of annuities and decided I’d like to set one up.  At that time, the only place you could establish an annuity was with NHCF so that’s what we did. I’ve been very happy with the annuity; I’ve had no trouble at all. I’ve spoken with others interested in setting up an annuity and have talked about why I set up an annuity and talked about things they might consider like a charitable remainder trust, or giving a tangible asset you want to sell (e.g., a little cottage by the sea) to The Music Hall with the stipulation they sell it and turn the money into an annuity, which will help both the seller and The Music Hall. The price at which TMH sells your tangible asset becomes a full deduction without incurring a capital gains tax.

The advantage right now with an annuity is that you get a reasonable return on your investment and if you don’t need all of the money that’s in the annuity you can give it to The Music Hall. The interest you receive depends upon your age and whether the annuity is established for a couple vs. one person. You have to take at least 5% of the interest each year, but you could contribute the rest and get a larger charitable deduction. You can also write off a certain percentage of the annuity on your taxes. I recommend having someone explain the intricacies of annuities and trusts and what’s the best way to really make money on it.

What would you tell others who are considering joining The Music Hall?
If they like to go to performances, go to the theater and see a lot of music as well as various types/genres of music, then The Music Hall is the place to go. If The Music Hall didn’t exist there would be, in my mind, a lack of real top-notch entertainment in the Portsmouth area. In fact one of the reasons, the main reason, is to have an enjoyable experience watching and listening to performances.

LET US THANK YOU
If you have included The Music Hall in your will or estate plans, please let us know. We would like to thank you for your generosity, make sure the purpose of your gift is understood by the Theater, and recognize you as a member of the 1878 Legacy Society. For more information please contact Gail VanHoy Carolan, Director of Institutional Advancement, at 603-766-2174 or gcarolan@themusichall.org.