20 years of TBTS: A Conversation with Bill and Stella Pence

The Pences moved to Portsmouth in 1999. That same year they approached the local movie house, The Music Hall, with an idea to bring to their new community a set of film premieres, a sample of six films from the esteemed Telluride Film Festival, which they had helped found back in 1974. The Music Hall accepted.

Bill and Stella moved from Portsmouth to Sleepy Hollow, NY last year. Thankfully that has not changed much for The Music Hall. Bill remains TMH Film Curator, which means I still have the good fortune of being in touch with him each month about the film schedule. And Telluride by the Sea continues—now, in its 20th year. I spoke with Bill and Stella recently about the course that Telluride by the Sea(TbtS) has charted through the years. 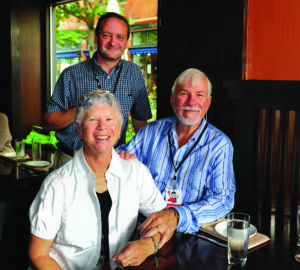 “The film that sticks out for me from that first TbtS in 1999 is David Lynch’s Cannes Palme d’Or nominee, The Straight Story. Such an interesting film” says Bill. Stella offers, “The year (2000) we brought George Butler’s retelling of Shackleton’s ill-fated expedition to Antarctica, The Endurance—that stands out in my memory. We had the replica ship from the film onstage, which was revealed to the audience when the screen flew up after the film. What a night! That was the same year Ken Burns gave the Telluride by the Sea audience a sneak peek at the newest episode of his Jazz series.” Bill continues, “What truly excited me in bringing this festival to Portsmouth is that it brought back the feeling of Telluride Film Festival in its early days before it became the internationally known festival it was to become. Telluride by the Sea is smaller, more intimate. And one need not choose one film over another. But the same excitement and expectation are there.” Stella adds, “Yes, we’ve seen film audiences all around the world, and the feeling at Telluride by the Sea is special. People come and really want to have a good time, be excited about the latest art of cinema, eat some popcorn, catch up with friends. Another great aspect of this festival is that folks come with open minds, very often knowing little of what to expect from the weekend’s program. That reflects the essence of the parent festival—‘Let’s go see something, maybe even something which might not seem attractive at first glance.’ Challenge yourself, take a risk.”

“Is there anything else you’d like to offer as we head to year 20 of this gift you brought to the Seacoast?” I ask. Bill replies, “Simply that we’re still here. It’s wonderful that the festival has gone so strong for so many years. I mean Stella and I are no longer there, living in Portsmouth, but we’re delighted Telluride by the Sea continues to make people happy. And we will be there. We’re coming back to town to attend opening night and looking forward to it!”