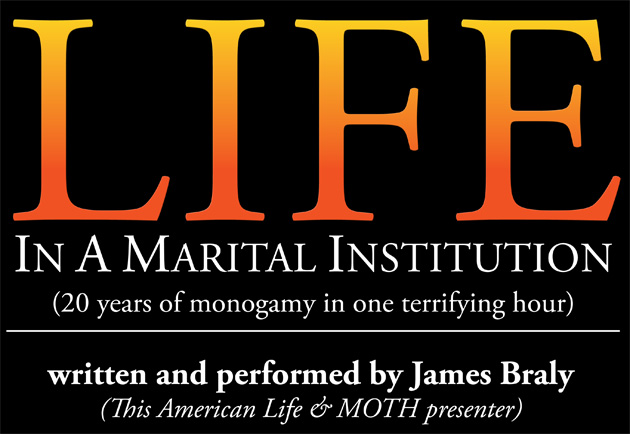 MV: My partner Amy Rapp and I have a company, Meredith Vieira Productions. We’re interested in bringing comedies and drama to the public that are character driven. I’ve always been a major fan of theater and it was really Amy who said, “You’ve got to take a look at this show.” To be honest with you, I’d never heard of James Braly before, but I saw his monologue and it blew me away.  It was funny.  It was dark.  It was biting and it was about a dysfunctional marriage. Every marriage has a little dysfunction to it.  And it made me laugh and also teared me up a bit.  We were lucky enough to court James successfully.  It’s been a wonderful partnership – the idea that we could help expose him to the rest of the country was something that we are excited about.

KS: James, I wanted to ask you about the topic of the show. I love the blurb “a darkly funny tale of 20 years of monogamy in one terrifying hour.”  As somebody who’s been married a lot longer than that I wonder, are we going to scare off potential audience members who aren’t married yet?!!!

I know people who have seen the show and decided they should move in with each other!– James Braly

JB:  It depends on how confident they feel in their relationship, definitely!  I don’t think so. My developmental past had me going through an organization called the “Moth” in New York, where the demographic was, at the open mic’s was 18-30, and at the more fancy functions was 25-60 and the 18-30 year olds are frequently not married.  So a lot of the material I developed was for younger people who were not married. The show deals with different stages of a relationship not just the post marital stage and the stages thereafter but the courtship issues also. Actually I know people who have seen the show and decided they should move in with each other!

MV: I wanted to go back for a second to story telling because it seems like a dying art, yet I’m not sure, I can’t name any of these great story tellers. After Spaulding Gray, I didn’t hear of any others and that’s why James is so special to me. I feel it is an art form that needs to be expressed especially in a day and age where we talk less and less and conversation is done through texting and I think sitting in an audience and just listening to somebody tell their story, there’s something so intimate and special about it that I find that makes the evening with James so magical because you’re not going to find it elsewhere.

KS: Meredith, the sense I have is that’s you’re all about telling stories.

MV: Absolutely, because I think at the end of the day –  I got a lot of that from Don Hewett of 60 Minutes who said you know it’s not the picture it’s the words – tell me a story. Talk about a successful formula for a broadcast after all these years and Don was right, good story telling is an art form and it’s rare because it’s not easy to do.  It takes a real talent to pull it off and that’s what you have in James.  And your audience will see that for themselves.

KS:  James, tell us about the evolution of the show – starting in Edinburgh then in New York City, now it’s on tour and it looks like you’re talking about a screenplay?

JB:  Yes, we have been developing, actually on kind of two tracks, one as a feature screen play and the other as a television series and so it is in development right now.

KS:  What can patrons expect to see or hear as they’re sitting in this intimate Music Hall Loft at your show?

JB:  Well I’m hoping they’ll experience themselves laughing and what initially feels like wholly inappropriate ways, but then once they feel the permission to have that emotional experience they go on a journey with me, they go on a ride with me and at the end of the ride they feel, at the very least, entertained and something they may not have felt before.  Often times when you see a feature or you read a book you get lost in those characters and that’s true of storytelling but ultimately it brings you back to asking questions of your own life and of the people in it and it’s a very provocative form in that sense.  So it holds you, if done well, as entertainment and then it asks you to ask yourself some questions.  So I’m hoping that they feel really satisfied – that their time is well spent.

KS:  We are very much looking forward to Meredith Vieira’s Production of Life In A Martial Institution with James Braly at the Music Hall Loft September 9 to the 11th in downtown Portsmouth NH. Thank you!