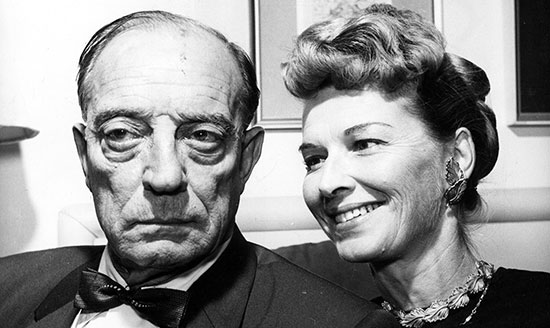 This heartstopping clip from Steamboat Bill, Jr. is one of the most iconic shots in Hollywood history. Had the falling two-ton facade missed its precise mark, Buster Keaton would have been, as one colleague put it, “driven into the ground like a tent peg.” Two extras fainted, certain they were about to witness a fatal accident. The director left the set to pray in private. The cameraman looked away while he cranked.  Some crew members whispered that Buster didn’t seem to care if he lived or died.

You see, on that day in 1928, Buster’s future was also on the verge of collapse. His marriage to Natalie Talmadge was crumbling. His contract as an independent filmmaker had just been sold to MGM; Buster rightly feared that studio bosses would micro-manage his work and crush his creative freedom (they did). Years later, reflecting on the dangerous Steamboat Bill, Jr. stunt, Buster admitted, “I was mad at the time, or I never would have done it.”

Buster survived, but things quickly went from “mad” to worse. Stripped of artistic control, he was cast in a string of MGM stinkers, and began drinking like it was his job. Natalie not only took Buster to the cleaners when they split, she humiliated him by changing their kids’ surnames from Keaton to Talmadge. Then – proving that misery loves catastrophe – MGM fired Buster, who went on a week-long bender in Mexico. The trip culminated in Buster marrying the gold-digging rehab nurse hired to keep him sober, though (irony alert) he was too drunk to remember the ceremony.

By the mid-1930s, Buster’s boozing got so bad, he was rushed to the hospital in a straitjacket, where doctors warned that if he didn’t get clean, he would die. With the clarity that comes from hitting rock bottom, Buster divorced the nurse, got his act together, and in 1938, he met the soul mate who would save his life and rescue his career.

Eleanor Norris was a 20-year-old contract dancer at MGM who wanted to learn how to play bridge. A friend mentioned that Buster hosted a daily running game at his house. So, over the next six months, Eleanor would stop by twice a week, quietly getting the hang of things…until one night when she yelled at a mansplainer who critiqued her card-playing skills. Across the room, Buster took notice of the kerfuffle – and finally took notice of the spunky blonde.

At the time, Buster was old enough to be Eleanor’s father. Between their 23-year age gap, Buster’s alcoholism, and his meager job prospects, he wasn’t what you’d call a “good catch.” In fact, even Buster’s friends tried to talk Eleanor out of marrying him. But Eleanor believed in Buster – as a person, as a performer – and her love inspired Buster to believe in himself.

After tying the knot on May 29, 1940, Buster’s off-screen happiness fueled his on-screen comeback. He wrote movie gags for Judy Garland, Red Skelton and Lucille Ball. Scored funny bits in big-budget comedies. And long before other stars, Buster wholly embraced television, lending his genius to dozens of commercials and top-rated shows, like The Twilight Zone and Candid Camera.

Through it all, Eleanor was Buster’s rock and greatest champion. Unlike rarely seen silent comedy peers Charlie Chaplin and Harold Lloyd, Buster never stopped working. At film festivals, he was hailed by new generations of fans. To his surprise, Buster received an honorary Oscar in 1960 that Eleanor said left him “all choked up.” Thirty-six hours after sharing one last bridge game with his wife, Buster died on February 1, 1966; Eleanor continued to burnish his legacy until her death, 32 years later.