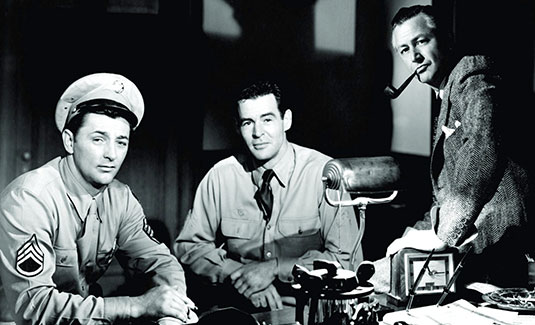 In 1947, two movies dealing with anti-Semitism were released just four months apart. First came Crossfire in July, followed by Gentleman’s Agreement in November. Both films were critical hits. Both racked up Oscar nominations (13 between them). Both are worthy of your time. That said, I find Crossfire the more compelling of the dramas, thanks to its combo punch of riveting performances and lasting emotional impact.

Crossfire casts Robert Young (Father Knows Best) as a homicide detective out to bust the killer of a Jewish man (Sam Levene). In the course of his investigation, the cop confronts harsh truths about soldiers who fought fascists abroad, yet stoke hatred at home. While Gentleman’s Agreement prevailed at the Academy Awards, winning Best Picture, Director, and Supporting Actress, I give Crossfire props for exposing the scourge of anti-Semitism with more hard-hitting frankness.

Young is one of three Roberts on screen, top-billed over newcomers Robert Ryan and Robert Mitchum. The picture was based on Richard Brooks’ 1945 novel, The Brick Foxhole. The book focused on a gay man’s murder, which was unfilmable under the production code of the era, so screenwriter John Paxton tweaked the tale: Homophobia out, anti-Semitism in.

Novelist Brooks actually served in the Marines at the same time as Robert Ryan, and Ryan lobbied Brooks for the lead if The Brick Foxhole ever became a motion picture. Two years later, the deal was sealed, although Ryan would regret that Crossfire typecast him as a violent, nasty dude. Off-screen, Ryan was no bigot. He was a liberal Democrat who spoke out against nuclear arms and the Vietnam War and marched for civil rights. Yet when the cameras rolled, few performers could bring the menacing goods like Ryan.

Gloria Grahame added Hollywood’s requisite sex appeal for her supporting role as a world-weary barfly that earned Grahame her first Oscar nomination. (Gentleman’s Agreement co-star Celeste Holm won, but Grahame copped the prize in 1952 for The Bad and the Beautiful.) In this production as well as others, the alluring blonde proved she was more than just a pretty face.

Still, executives at RKO feared the movie’s risky premise would tank with audiences. Upending expectations, it became the studio’s top-grossing hit of the year.  Although producer Adrian Scott and director Edward Dmytryk were among the blacklisted “Hollywood Ten” who went to jail rather than rat out their peers, Crossfire stands as their finest collaboration.

Scott’s memo to his boss about the message Crossfire delivered is as timely today as it was 75 years ago: “This is a story of personal fascism as opposed to organized fascism. [It] indicates how it is possible for us to have a Gestapo, if the country should go fascist…Fascism hates weakness in people… In the book, [the killer] murders a [homosexual]. He could have murdered a Negro, a foreigner or a Jew.” On screen or off, intolerance remains a blight on society.