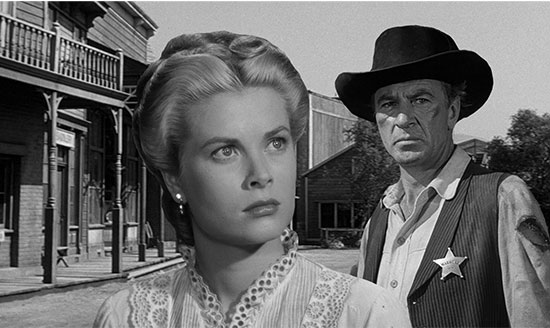 They say High Noon is popular with presidents: Reportedly, it was the favorite movie of Ronald Reagan, G.W. Bush, and Bill Clinton, who allegedly screened it 17 times during his tenure. Being the commander in chief of the free world is a lonely job – Clinton joked that the White House is “the crown jewel in the federal penal system.” No wonder Oval Office occupants can relate to the Oscar-winning story of a marshal (Gary Cooper) who must confront a vengeful enemy alone.

In his autobiography, director Fred Zinnemann recalls his first reaction to reading the script. He thought it “nothing short of a masterpiece – brilliant, exciting and novel in its approach.” It was typed as a Western, but not a typical one. This was no “cowboys-and-Indians ” clash, no “good guys in white hats vs. bad guys in black hats” face off (in fact, Cooper wore a black hat throughout). The drama built tension through silence, close-ups of clocks ticking down to the deadly duel in real time, sweat beading on Cooper’s forehead. As Zinnemann said, “The Marshal was not fearless, he was scared; he was not a mythical figure, he was human.”

Perhaps the trope-busting aspect of High Noon was why the top stars of the ‘50s – Marlon Brando, Charlton Heston, Montgomery Clift, Gregory Peck – passed on the role that won Cooper his second Best Actor Oscar. John Wayne hated the picture, calling it “the most un-American thing I’ve seen in my whole life,” though when he accepted “Coop’s” award on his behalf, Wayne joked, “I’m going back [to] my business manager and agent…and find out why I didn’t get High Noon instead of Cooper.”

Zinnemann wrote that the film “seems to mean different things to different people. Some speculate that it is an allegory on the Korean War! [The producer] said it was about ‘a town that died because no one there had the guts to defend it…’ [The writer] saw it as an allegory to his own experience of political persecution during the McCarthy era…I saw it simply as a great movie yarn…the story of a man who must make a decision according to his conscience…In this sense, it is a cousin to A Man for All Seasons,” Zinnemann’s 1966 Oscar winner.

When they shot High Noon, Cooper’s career was in Slumpsville. He was 50, battling multiple health issues, separated from his wife. He looked geriatric next to his 21-year-old leading lady Grace Kelly. Yet Zinnemann had nothing but praise for Cooper: “Working with this most gentle and charming man turned out to be one of the happiest experiences of my life. Not once did he make an attempt to look younger…Gaunt, somewhat stooped, and walking a bit stiffly, he was exactly the right shape for the character. “

Nobody knew if fans would reject such an unconventional Western, but they loved it. At Oscar time, High Noon scored seven nominations and won four (including the chart-topping title song, “Do Not Forsake Me Oh My Darling”). Many blamed the blacklist politics of the time for the film’s loss to The Greatest Show on Earth for Best Picture.

For 70 years, High Noon has shown impressive staying power. As Zinnemann notes, “[Its] popularity waxes and wanes; people become very aware of it at times of decision, when a major national or political crisis is threatening.” In fact, during Poland’s first free elections in 1989, posters bearing Cooper’s iconic image and the Solidarity party’s logo were plastered everywhere. Freedom-loving Poles could clearly identify with a cowboy hero bravely standing up for justice.