Classic Hollywood: Films of ’52: The Bad and the Beautiful 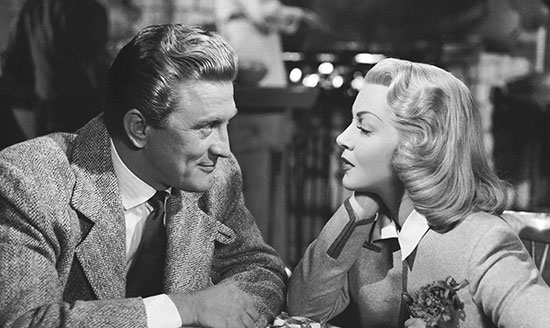 The 1950s saw a rash of films about show biz. Some were light-hearted (Singin’ in the Rain, The Band Wagon). Others told a darker tale (Sunset Blvd., All About Eve, A Star is Born). Lost in the shuffle is one of my favorites: The Bad and The Beautiful, starring Kirk Douglas as a ruthless film producer and the people whose careers he championed, including an alcoholic actress (Lana Turner), a Southern writer (Dick Powell), and a B-movie director (Barry Sullivan).

“People who read the script asked me why I wanted to do it,” explained director Vincente Minnelli in a Los Angeles Times interview. “It was against Hollywood, etc. I told them I didn’t see [Kirk’s character] as an unregenerate heel—first, because we find out he has a weakness, which makes him human, and second, because he’s tough on himself as he is on everyone else, which makes him honest. That’s the complex, wonderful thing about human beings—whether they’re in Hollywood, in the automobile business, or in neckties.”

I cannot imagine anyone else but Kirk in the lead, though apparently, Clark Gable and Spencer Tracy’s fingerprints were on the script before Kirk signed on. After all, around Hollywood, Kirk was known for being…difficult. Gossip columnist Hedda Hopper told him, “Now that you’ve become a big hit, you’ve become a big SOB.” Kirk retorted, “You’re wrong. I was always an SOB. You just never noticed before.”

As for Minnelli, writes film critic Pauline Kael, he shot a world he knew intimately – and shooting provided a welcome distraction during his divorce from Judy Garland: “Minnelli has captured the eerie quality of an empty sound stage at night, the sterilized look of a writer’s office on the lot, the dull meaninglessness of a noisy cocktail party attended by picture people. As an exhibition of know-how in picture-making The Bad and the Beautiful is first rate…”

Penn State professor Kevin Hagopian agrees that Bad delivers an authentic insider’s view of the motion picture industry: “Minnelli became fascinated with the creative paradox of Hollywood, a place where hypocrisy and deceit reigned, yet also…where loyalties could run as deep as any he had ever seen. Minnelli saw front-office machinations worthy of Machiavelli, but he also saw intensely creative people exhaust themselves staying up night after night to help a colleague out of a jam…the same soundstages witnessed both the lies and the love, as productions became melodramas unto themselves.”

Hagopian adds: “As [Minnelli] mused in his autobiography I Remember It Well: ‘There were dark undercurrents to be sure…The talk of the dehumanizing of the stars and the prostituting of the writers’ talents. But never had I met such animated robots or such willing whores.’ Or, as Minnelli’s good friend Oscar Levant was wont to say, ‘Strip the phony tinsel off Hollywood and you’ll find the real tinsel underneath.’”

Holding their own in the testosterone-heavy cast are Gloria Grahame, who spun 9-1/2 minutes of screen time into a Best Supporting Actress Oscar, and Lana Turner, who’s never been better, particularly in a scene where she becomes hysterical while driving her car in a rain storm. When all is said and done, the six Oscar nods (and five wins) The Bad and the Beautiful earned confirm just how good it was then…and how worthy of a watch it is now.