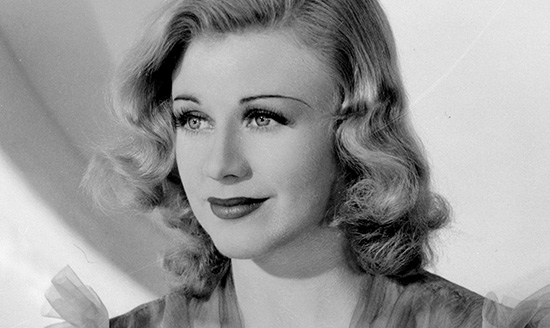 Betcha if I say “Ginger Rogers,” you think “Fred Astaire.” It’s the classic-movie equivalent of the patellar reflex. Paired by destiny (or in their case, RKO), they dazzled Depression-weary audiences in nine musicals between 1933 and 1939. While Fred deserved props for his fancy footwork, many have noted that Ginger did everything Fred did…only backward, in high heels, even once wearing a 25-pound beaded gown.

Yet the duo did more than just dance. They sang a hit parade of tunes by Irving Berlin, Cole Porter, and the Gershwins. Sure, their pics raised Ginger’s profile. But Ginger had already made 21 films before joining forces with screen-rookie Fred, and she enjoyed acting with a variety of co-stars: “It’s not as if we were Abbott & Costello. We did have careers apart from each other.” Still, it’s hard to top Katharine Hepburn’s take on the twosome: “He gives her class, and she gives him sex.”

Born Virginia Katherine McMath on July 16, 1911, in Independence, Missouri, Ginger got her nickname from a young cousin who couldn’t say “Virginia.” Her parents split prior to Ginger’s birth, and after the tot was kidnapped – twice – by her father (can you say, “Awkward Thanksgiving”?), her Mom called the cops and Dad blew town, never to be seen again.

At 14, Ginger won the Texas State Charleston Championship. At 17, she wed the first of five husbands, all of whom she divorced. By 19, Ginger was the toast of Broadway in Girl Crazy, where she met Fred (hired to help with choreography), and introduced the Gershwin standards, “Embraceable You” and “But Not for Me.”

In 1930, Ginger made her feature film debut in a creaky rom-com called Young Man of Manhattan, memorably asking her beau to “Cigarette me, big boy.” Three years later, Ginger caused a splash in a trio of pictures: Singing “We’re in the Money” in Pig Latin (her brilliant idea) in Golddiggers of 1933; playing a wisecracking chorus girl in 42nd Street; and coupling with fifth-billed Fred to dance “The Carioca” in Flying Down to Rio. From there, they took off like a Jeff Bezos space rocket.

Between gigs with Fred, Ginger flew solo in Stage Door, Bachelor Mother, Fifth Avenue Girl, Vivacious Lady, The Major and the Minor, and Tom, Dick and Harry. Ginger’s dramatic chops in Kitty Foyle (1940) won her an Oscar. Accepting the award, Ginger said, “This is the greatest moment of my life. I want to thank the one who has stood by me faithfully: My mother,” who doubled as Ginger’s manager throughout her career.

Off-camera, the lifelong Christian Scientist lamented her marital track record, admitting, “I yearned for a long, happy marriage with one person.” Ironically, Ginger’s most enduring relationship was with Fred, who came close to confessing she was his favorite leading lady in a 1976 interview: “Ginger was the most effective partner I ever had. Everybody knows that.”

Garson Kanin, who directed Ginger in two comedies, captured the team’s timeless appeal: “The magic of Astaire and Rogers cannot be explained; it can only be felt. They created a style, a mood, a happening. They flirted, chased, courted, slid, caressed, hopped, skipped, jumped, bent, swayed, clasped, wafted, undulated, nestled, leapt, quivered, glided, spun – in sum, made love before our eyes.”