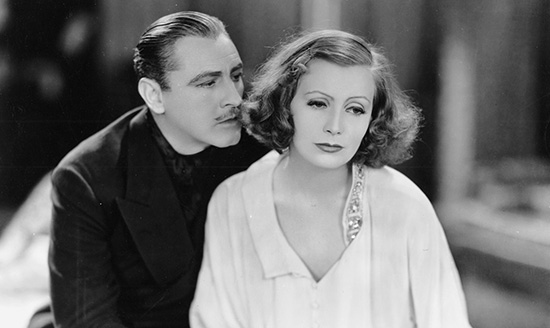 In 1932, MGM invented a new concept in filmmaking. At the time, studios rarely assigned more than two big names to the same script. They figured, “Why squander several hot actors in one project when we can maximize ticket sales by rationing them out in two or three pictures instead?” That is, until MGM production head Irving Thalberg had a “Boy Genius” brainstorm: “What if we had an all-star cast check into Grand Hotel? Then it wouldn’t ‘just’ be a movie – it would be an event.”

When Thalberg’s Hotel hunch paid off, he would repeat the feat a year later with Dinner at Eight. Boom! Back-to-back blockbusters…and the so-called “Grand Hotel formula” was born.

Filmsite.org sums up the plot: “Grand Hotel [tells] the multiple narrative story of the criss-crossing of the lives of five major guests whose fates are intertwined for a two-day period.” That’s all you need to know. What you may not know is that two of those “guest” stars – Garbo, John Barrymore, Lionel Barrymore, Wallace Beery, and Joan Crawford – weren’t Thalberg’s first picks. He initially considered rising studmuffin Clark Gable for John’s role and comedian Buster Keaton for Lionel’s. (In her Keaton bio Camera Man, Dana Stevens reports that Buster praised Lionel’s performance, yet dryly added, “I would have played the part differently.”)

Studio brass, concerned about endless ego collisions during the shoot, tapped director Edmund Goulding: His ability to wrangle hard-to-handle talent had earned him the nickname, “The Lion Tamer.” Some claim that Garbo and Crawford clashed; others say MGM prevented any dueling diva fireworks by ensuring they never shared a scene. No matter what happened on set, Andrea Passafiume explains at TCM.com, “Grand Hotel was responsible for giving [Crawford] a big boost as she moved toward A-list stardom…[the] part gave her the chance to hold her own against some of Hollywood’s heaviest hitters, including Garbo, one of her idols.”

So, how did silent screen titans Garbo and John Barrymore get along? Rumor has it Garbo kept smooching Barrymore for a full three minutes after Goulding yelled “Cut!” on their love scene. Garbo called Barrymore “one of the very few who had the divine madness without which a great artist cannot work or live,” while Barrymore gushed, “Greta bears the unmistakable mark of greatness. Simplicity. It isn’t acting; it has nothing to do with acting; it is something that holds us in its spell, a kind of magic. This magic is Garbo.”

Despite its embarrassment of acting riches, Grand Hotel remains the only Best Picture Oscar winner to score no other nominations. And sure, like many 90-year-olds, Hotel has its creaky moments. Still, I think the chance to watch so many legends trying to upstage each other is worth it – particularly when Greta Garbo delivers the line that would come to define her: “I want to be alone.”

Ever eager to milk cash cows, Hollywood has recycled the all-star cast concept in everything from 1970s disaster flicks (Airport, Towering Inferno, The Poseidon Adventure), to more recent crime capers (looking at you, Ocean’s Eleven franchise). But in Hollywood’s Golden Age, Grand Hotel remains the first – and best – of its kind.