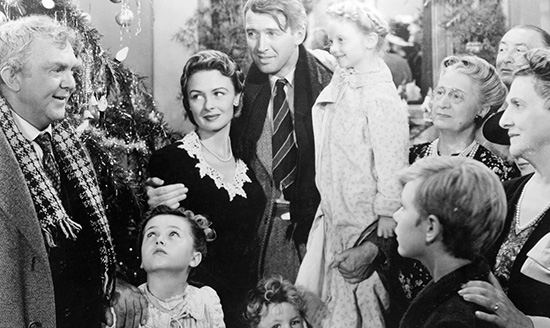 Watching It’s a Wonderful Life is a holiday tradition, like hearing Bing sing “White Christmas” or glugging down Grandma’s eggnog. What may shock you is that the beloved drama tanked upon arrival in 1946, ranking 26th in the year-end box-office recap. Why is it now considered a classic? Because in 1974, the film went into the public domain, meaning TV stations could air it for free – and hundreds did. But Life’s loss (of royalties) is our gain, as its popularity has exploded over time.

The picture’s back story is pretty fascinating, too.

After five years of making documentaries for Uncle Sam, director Frank Capra returned to postwar Hollywood wracked with doubt. Studios were teeming with fresh talent, and the three-time Oscar winner wasn’t sure he still “had it.” Then, Capra read a short story that was right in his wheelhouse: The tale of a small-town guy whose guardian angel shows him what the world would be like if he’d never been born.

While husband-and-wife writers Frances Goodrich and Albert Hackett drafted the script, Capra “drafted” the only actor he wanted for George Bailey: James Stewart. Decorated war hero Jimmy shared Capra’s “performance anxieties,” and privately battled PTSD. Yet having worked with Capra twice before (You Can’t Take It With You and Mr. Smith Goes to Washington), Jimmy agreed to hear his pitch.

Capra recounts the meeting in his autobiography: “It was four years since I had last told a story to an actor and six years since Stewart had last heard a story from a director. Jimmy listened quietly – bored, I thought.” Jimmy picks up the story in The “It’s a Wonderful Life” Book: “All of a sudden Frank interrupted himself and said, ‘This really doesn’t sound very good.’ And I said, ‘Frank, if you want to do a movie about me committing suicide and an angel that hasn’t won its wings named Clarence, I’m your boy.’”

Lionel Barrymore (Mr. Potter) may have been Jimmy’s nemesis on screen, but off-screen, he quelled Jimmy’s nerves: “Every once in a while, Barrymore would get me in a corner and say, ‘Everything’s going to be fine. You’ve got the idea, you got the character, so just take it easy.’ It was such a terrific thing for me. I’ll never forget it.”

The film was released through Liberty Pictures, a company led by directors Capra, William Wyler, and George Stevens. Fun fact: Wyler started shooting The Best Years of Our Lives the same day Capra rolled cameras on Life. Wyler marked the occasion with a telegram to Capra: “Last one in is a rotten egg.” Capra won the bet, but Wyler’s blockbuster swept the Academy Awards. Despite tepid ticket sales and a total Oscar shutout, Stewart and Capra called It’s a Wonderful Life their favorite film.

Millions of fans would agree.