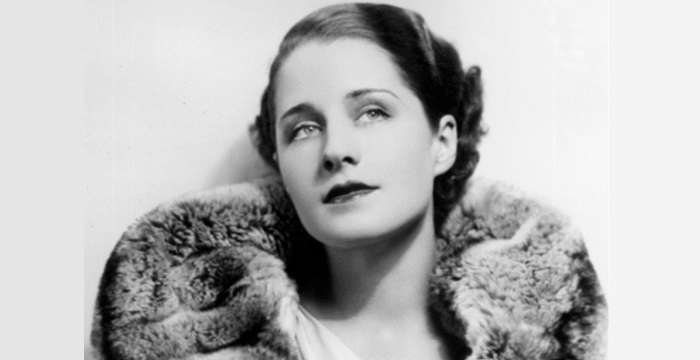 Remember that episode of The Mary Tyler Moore Show, when Lou tells Mary, “You know what? You’ve got spunk!” then adds, “I hate spunk”? Norma Shearer had spunk in spades – and it made her a star.

In 1920, Ziegfeld Follies producer Flo Ziegfeld called the 18-year-old Shearer “that dog,” but she didn’t flinch. Legendary director D.W. Griffith said, “You’ll never make it” in films, but she ignored him. And five years after those brutal assessments, Norma wasn’t just on movie screens. She dominated them.

Here are five more times when Shearer’s pluck paid off:

1) After the family fortune tanked in Montreal, Norma’s mother moved with her two teenage daughters to a cheap boarding house in New York, next to an elevated train track. The intrepid trio shared one double bed and a cot that lacked a mattress, often skipping meals to make ends meet.

2) Norma had a condition called strabismus, which made her look cross-eyed – hence Ziegfeld’s harsh critique. Yet Flo’s “diss” only fueled Shearer’s resolve. She had eye surgery. Got her teeth capped. At casting calls, Norma would pull smart tricks, like coughing to grab a producer’s attention as he walked past her in a chorus line.

3) Summoned to Hollywood by MGM in 1923, Shearer was miffed when she wasn’t met at the train by studio reps. Marching into the anteroom of production chief Irving Thalberg, Norma ordered the “office boy” to present her to his boss, and was stunned when the 24-year-old “lackey” turned out to be Thalberg himself. Digging her hole deeper, she bluffed about being a hot property in town: “Last year, Universal offered me $200 a week!” Irving replied with a grin, “Miss Shearer, I was at Universal then and offered you that deal. It wasn’t even close to $200 a week.” (Busted!)

4) Thalberg admired Norma’s chutzpah and personally fast-tracked her career, giving her the pick of scripts and directors. Off-camera, Shearer fell for Irving, converted to Judaism and married him in 1927, with studio head Louis B. Mayer as the best man…truly a company merger. MGM rival Joan Crawford bitterly resented Shearer’s ascension to Queen of the Screen Lot: “How can I compete [for choice roles]? Norma sleeps with the boss.”

5) Prior to Thalberg’s untimely death in 1936, Shearer stopped working for months at a time to nurse her ailing husband, who told friends that Norma “literally kept me alive.” Shaking off a deep depression following Irving’s demise, Shearer made six films, retired in 1942, married a ski instructor 14 years her junior and lived happily ever after.

The Divorcee, A Free Soul, The Women.