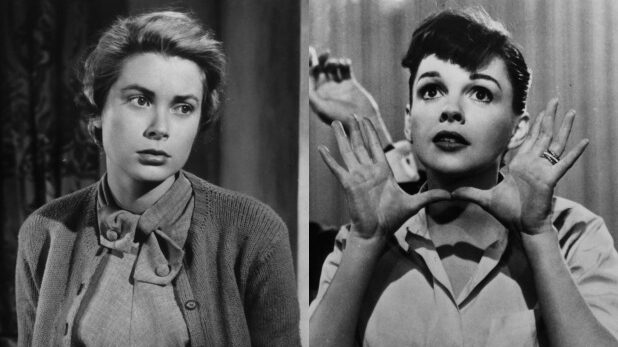 Sometimes, Academy Awards are given to the right actor in the wrong year.

Exhibit A: James Stewart was nominated for Mr. Smith Goes to Washington, but lost to Robert Donat for Goodbye, Mr. Chips. A year later, Stewart won for The Philadelphia Story, viewed by many as a consolation prize for Mr. Smith. Ironically, Jimmy didn’t even vote for himself. He thought Henry Fonda gave a superior performance in The Grapes of Wrath, but Stewart’s win meant Fonda waited 41 more years to (finally!) cop the Best Actor crown for On Golden Pond.

Of course, a belated Oscar beats no Oscar, right? Just ask Cary Grant or Barbara Stanwyck, who had to settle for honorary Academy Awards, despite multiple nominations during their legendary careers.

Then there are years when the top Oscar contender loses and never scores Hollywood’s most coveted prize.

In 1954, Judy Garland scorched the screen in A Star is Born, delivering a tour-de-force performance in a production riven by delays and budget woes. When she sings “The Man That Got Away,” I always get goosebumps. When she calls herself “Mrs. Norman Maine,” following her husband’s suicide, it chokes me up, every time.

I’m not alone: Time magazine called Star “the greatest one-woman show in modern movie history,” while cynics marveled at Garland’s cat-with-nine-lives ability to rise from the show biz grave with comeback after comeback. Judy’s nomination as Best Actress instantly made her the front runner. After all, few artists could rival Garland’s genius for bringing audiences to cheers and tears with her talent.

The day before the awards ceremony, expectant mother Judy added real-life drama to the mix by going into labor two weeks early. On Oscar night, Garland was recuperating from emergency C-section surgery in her hospital room, which had been commandeered by a TV crew, ready to broadcast Judy’s acceptance speech when – not if – she won. Garland’s next-door neighbor Lauren Bacall was at the event, eager to collect the trophy on her friend’s behalf.

So, when William Holden announced, “Grace Kelly for The Country Girl,” Judy’s fans were stunned. Over at the hospital, Garland’s husband Sid Luft let the curse words fly. She consoled him, saying, “Forget it, darling. Open the champagne. I have my own Academy Award,” meaning their newborn son. But later that evening, Judy tearfully admitted, “I deserved it. They just wouldn’t give it to me.”

What happened? Maybe Academy voters from Paramount (which produced Kelly’s picture) and MGM (her home studio) joined forces to tilt the tally in Grace’s favor. Perhaps film execs hoped to stem the exodus of viewers to TV by rewarding a glamorous newcomer like Kelly instead of a veteran performer like Garland. It also didn’t help matters that Warner Bros., which released A Star is Born, had a rocky relationship with the Academy.

We’ll never know for sure why Judy lost – reportedly, by a mere six votes. But for my money, Groucho Marx nailed the shocking upset in his telegram to Garland: “Dear Judy: This is the biggest robbery since Brink’s.”