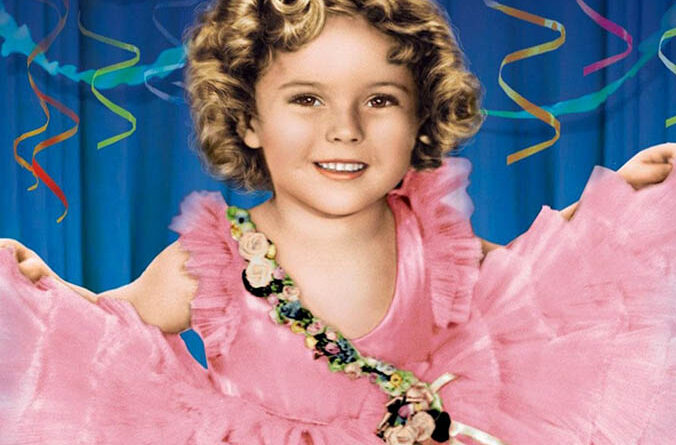 In the 1930s, two of the most powerful antidotes to the Great Depression were a racehorse named Seabiscuit and a little girl named Shirley Temple. Both were overnight sensations. Both lifted the sagging hopes of a weary nation. Both were merchandising machines, whose images graced everything from toys to clothing. If Seabiscuit could speak, he might have eclipsed Shirley’s popularity – but no other child star ever has.

Yet “star” doesn’t really capture Shirley’s impact. More phenomenon than mere performer, Shirley was the #1 box-office draw for four straight years (1935-38), leaving legends like Gable and Garbo in the dust. An authority no less than FDR noted, “When the spirit of the people is lower than at any other time, it is a splendid thing that for just 15 cents an American can go to a movie and look at the smiling face of a baby and forget his troubles.”

Shirley modestly attributed her popularity to timing: “People in the Depression wanted something to cheer them up, and they fell in love with a dog – Rin Tin Tin – and a little girl.” Despite her global fame, Shirley remained firmly grounded by her parents, who managed her career (brilliantly), but mismanaged her finances (terribly), draining her $3 million trust fund down to $45,000. Still, she bore no grudges and kept her notoriety in perspective, saying, “I always think of her as ‘the little girl.’ She’s not me.”

Shirley Jane Temple was born in Santa Monica, California on April 23, 1928. Her mother Gertrude enrolled her three-year-old daughter in a dance school for pint-sized movie hopefuls, which led to gigs in eight Baby Burlesks shorts. Ironically, Shirley didn’t make the cut for the more famous Our Gang comedies for reasons its producers surely came to regret!

An adorable bit in Baby Take a Bow (1934) delivered Shirley’s big break. From there, Shirley won parts in Little Miss Marker, Now and Forever (easily upstaging Gary Cooper and Carole Lombard), and Bright Eyes, performing her signature song, “On the Good Ship Lollipop.” Signing with 20th Century-Fox, she saved the studio from bankruptcy with leading roles in Poor Little Rich Girl, Curly Top, Stowaway, Wee Willie Winkie, Heidi, and The Little Princess. As a teen, she co-starred in Since You Went Away (1944) and The Bachelor and the Bobby-Soxer (1947), as Myrna Loy’s kid sister who’s smitten with Cary Grant. (Get in line, Shirl!)

Shirley’s best dance numbers featured tap legend Bill “Bojangles” Robinson. They dazzled viewers in four releases: The Little Colonel, The Littlest Rebel, Captain January, and Rebecca of Sunnybrook Farm. “Bill Robinson treated me as an equal, which was very important to me,” Shirley told NPR. “He didn’t talk down to me, like to a little girl…I liked people like that. And Bill Robinson was the best of all.”

After ending her screen career at 21, Shirley married businessman Charles Black in 1950. Once her three children were grown, Shirley turned her focus to politics, serving terms as U.S. Ambassador to Ghana (1974-76) and Czechoslovakia (1989-92), which she called “the best jobs of my whole life.” Naysayers may have smirked at Shirley’s diplomatic work, but Henry Kissinger praised her as “very intelligent, very tough-minded, very disciplined.” On February 10, 2014, the world’s most successful child star died at the age of 85.