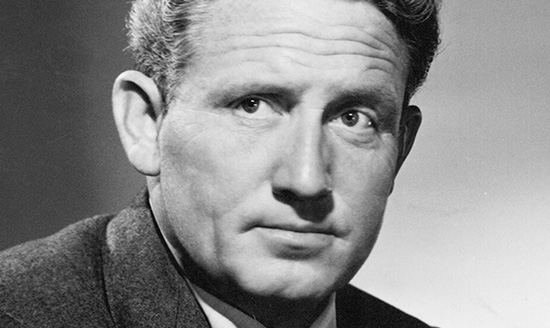 The best part about Spencer Tracy’s acting is that you rarely “catch” him doing it. There are no visible “Method” gears grinding, no hammy “Look-at-me!” moments. Spencer created real people from fictional characters and made it look easy, claiming his “technique” was simply “Know your lines and don’t bump into the furniture.”

(That said, Spencer’s life was rife with drama, girl!)

Recently, I read The Fixers, an exposé of studio executives who stopped at nothing – threats, bribery, violence – to protect the scandal-prone talent at Metro-Goldwyn-Mayer. According to author E.J. Fleming, Spencer’s reputation as a womanizing, combative alcoholic often required surveillance by MGM’s “Tracy Squad:” a doctor, ambulance driver, and four security guards, who mopped up (or paid off) the actor’s “bad boy” behavior.

Despite rumored affairs with everyone from teen sensation Judy Garland to future princess Grace Kelly to longtime love Katharine Hepburn, Spencer was married for 43 years to Louise Treadwell, the mother of his two children, Susie and John. A devout Catholic, Spencer chose not to file for divorce, so the couple lived mostly separate lives.

However, Spencer did support Louise’s work as the founder of the John Tracy Clinic, named for their hearing-impaired son. At one press event, Spencer remarked, “I am a star…[but] there’s nothing I’ve ever done that can match what Louise has done for deaf children and their parents.”

Who was this complex, gifted performer? Spencer Bonaventure Tracy was born in Milwaukee on April 5, 1900. He attended Ripon College in Wisconsin, where he fell in love with acting. From there, Spencer trod the well-worn path to New York, rooming with high school classmate and fellow show biz wannabe Pat O’Brien at the Academy of Dramatic Arts.

In 1930, Spencer was discovered by director John Ford while headlining the Broadway drama, The Last Mile. After five years at Fox, Spencer upgraded to MGM, winning back-to-back Oscars for Captains Courageous and Boys Town. His hit list also includes San Francisco, Libeled Lady, Woman of the Year, Adam’s Rib, Father of the Bride, Bad Day at Black Rock, Inherit the Wind, and Judgment at Nuremberg. Guess Who’s Coming to Dinner, the last of Spencer’s nine films with Hepburn, wrapped just 12 days before his death on June 10, 1967.

One of the most moving Spencer stories I’ve read comes from Lauren Bacall’s memoir, By Myself. In Humphrey Bogart’s final weeks, Bacall writes, “Spence and Katie came almost every night… Bogie looked forward to their visits. So did I. They behaved as they always had: Spence pulling up a chair… telling jokes, kidding around. I don’t know how he managed, but he did. Much later, Katie told me that he was shattered before each visit and shattered after.”

When Bogie died, Bacall asked Hepburn if Spencer would deliver the eulogy. A few hours later, “Spencer called me and in a most pleading voice said, ‘I just couldn’t. I wouldn’t be able to get through it. I loved old Bogie. I could do it for someone I wasn’t that emotional about, but not for dear Bogie. Please understand, darling.’ Of course I understood. He was too close. He cared too much.”