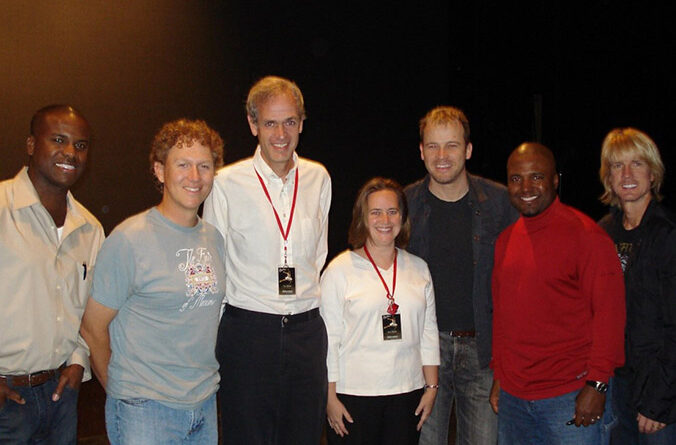 Ann and Tim Elliott are Advocate-level members and two of our all-star volunteers. For May Membership Month, they talked to Ticket and Member Services Manager Wesley Lovell about their experiences volunteering over the years and why they love The Music Hall.

Tell us a little bit about yourself and your involvement here.
We are longtime members and volunteers. We especially like to work the live music shows.

How did you first get introduced to us?
Ann actually performed at The Music Hall in 1991 with Up With People. Tim first heard of The Music Hall when The Flying Karamazov Brothers performed here around 1989. By the time we met in 1998, Tim was already a regular patron, and we soon realized we had a common interest and started volunteering.

What do you love about volunteering at The Music Hall?
There is a great community of regular patrons and volunteers that we get to be part of. Volunteering gets us into shows we might otherwise pass on or overlook – there have been some great surprises. Also, over the years we have become fans of musicians that we originally saw as openers for somebody else’s show.

What would you tell others who are considering joining as members?
The Music Hall is part of what makes Portsmouth a great city.

We see you around here a lot. What has been your favorite show or most memorable moment?
There have been so many.  We remember being part of the 125th anniversary celebrations in 2004. Also, we worked some fantastic Rockapella shows, including the one in this picture from 2007.