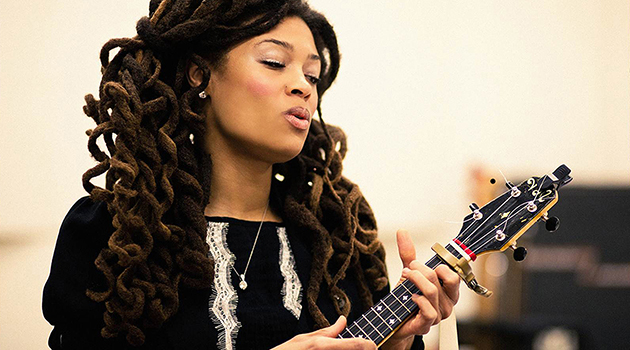 Thérèse LaGamma: You’ve played at the Austin City Limits Music Festival, and performed on such great stages as Carnegie Hall and the Kennedy Center. What have been some of the highlights along the way?

VALERIE JUNE: I’m so grateful to be fortunate enough to follow my dreams that I often find myself unable to answer this question. It’s a journey. I spend every second saying thank you!

LAGAMMA: I learned that you got your first guitar from your grandfather. Was he an influence on your decision to make music?

JUNE: My grandfather did not play music himself, but he bought the guitar at a yard sale and gave it to me.  Before he died,  I promised him that I would learn to play it. There were a lot of grandchildren and every one of us wanted that guitar. I felt that this was a promise I had to keep.

LAGAMMA: Who were your most important musical influences?

JUNE: I’m always discovering more musical influences. Wendy Rene is a Memphis singer that I’m currently obsessed with. I listen to her every day, sometimes letting a favorite song play over and over on repeat. I’m sure the neighbors love it!

LAGAMMA: Your father is a music promoter. How did this prepare you for a career in the music industry?

JUNE: It helped me realize that I preferred making the music and letting someone else promote the shows.  Promotion is hard work!

LAGAMMA: You were recently invited to collaborate with Mavis Staples on her latest album. Can you tell us a bit about what that meant to you?

JUNE: My father introduced me to The Staple Singers when I was little. Their music was a family affair around our house.  I was honored to meet Mavis and love her voice.

LAGAMMA: Tell us something about the band you are currently touring with— what can fans expect to hear when you come to Portsmouth on June 7?

JUNE:  I’ve made so many musician friends on the road and in New York that we could be called Valerie June & The Band of Northerners!  It’s funny how much I’ve started to love my life in the north. We are playing some new tunes and some old ones as well.