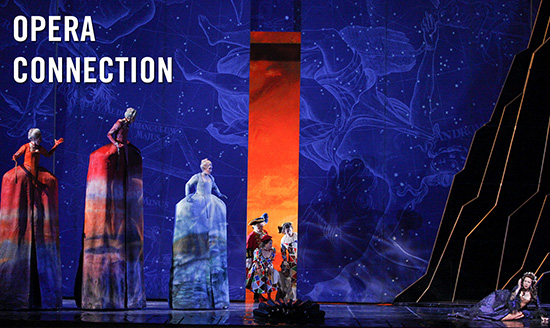 Join us on Sat., October 2 at 2pm for the Season Preview of Opera Connection with opera expert and writer-producer Dennis Neil Kleinman. Director of Institutional Advancement Gail VanHoy Carolan spoke with Dennis about the upcoming season, and because his answers were so beautiful, we’re breaking this interview up into two parts! (You can read part 1 here.)

How do you go about picking the Met Operas to talk about? What do you look for?
Since I explore each opera from multiple angles, I am attracted to operas for different reasons.  First off, I try to choose operas I haven’t discussed before. I am naturally curious when it comes to cultural works like these: How did they come to be? What was the cultural milieu that spawned them? How have they survived when so many operas are no longer performed? So I am always on the lookout for fresh operas to dig into. At the same time, certain operas (Don Giovanni, Madama Butterfly, and Carmen come to mind) are so transcendent and content-rich that I look forward to diving back in and finding new nuggets I totally missed with the previous go-rounds.

I am also drawn to operas that are of historic importance or exemplify certain trends within the culture at the time and that cast a light on where we are at this moment. For example, the opera Boris Godunov, which the Met will be presenting this year, is a wonderful example of the nationalism that swept over Europe in the second half of the 19th century and raised Russian music and literature to the greatest heights it ever reached. But it drew its inspiration and power from the same well as the toxic Russian nationalism of today, exemplified by Putin and his oligarchs.

What about this season are you particularly excited about?
The three operas I will be discussing this season basically span the Romantic Era in Western culture, from about 1825-1900, which will give me a chance to focus on how this splendid period of music and storytelling was born, blossomed, and decayed. It is an era of great artistic achievement, but also one where the schisms that are roiling our country and the world today first reared their ugly heads. So much to talk about!

The earliest work I’ll be discussing is Lucia di Lammermoor by Donizetti (Saturday, May 21, 2022), perhaps the finest example of the kind of brawny and bloody storytelling and musical fireworks that characterized the birth of Romanticism. Next, there is Don Carlos (Sunday, April 3, 2022), a mid-century masterpiece by Verdi. Dramatically dense and peopled with fully realized characters, it is grand opera at its grandest. And finally, Strauss’s Ariadne auf Naxos (Sunday, March 20), an opera about the pitfalls and pratfalls of producing opera, scored with the kind of intense chromaticism, and musical “special effects” that signify the end of the Romantic era and the birth of Modernism. So much to talk about!

Why do you think opera is gaining traction and resonating with people these days?
I would reframe the question slightly to read “Why is opera holding its own while other classical music forms like symphony and ballet are losing ground?” I think opera, with its interweaving of music and narrative, spectacular visual elements, and larger-than-life, gossip-worthy performers (mega-tenor Placido Domingo’s recent fall from grace comes to mind) is in some ways better suited to 21st-century audiences than other classical art forms. Actually, operas have much in common with movies, an art form that also blends stories with music, and which commandeered much of the opera audience after opera’s decline.

But another reason that opera resonates is its intense emotionality. The great opera composers fused two dramatic art forms—symphonic music and narrative—into one super-dramatic art form that transcends both. Opera can transport the receptive listener into a realm of pure—and sublime—emotional transcendence, the perfect respite from the chaotic, angst-ridden world-on- the-verge-of-a-nervous-breakdown we now find ourselves living in. It’s my job to give The Music Hall’s opera audience enough knowledge and confidence to enter that realm and, for a few hours at least, lose themselves in the splendors within.

To read the first half of my interview with Dennis, click here. And I hope to see you on Saturday at the Season Preview!