The Man, The Myth, The Legend: Monte Bohanan

This week, the infamous Monte Bohanan joined the coveted 20 Year Club! To celebrate, we asked him to answer a few questions—to call this blog post a “highlight” doesn’t do it justice. Monte wrote a love letter to our beloved theater and the whole Seacoast community. Let’s stroll down a red-carpeted memory lane with the “Mayor of The Music Hall.”

You’ve been here forever, how did you end up at The Music Hall as a wee lad, and why did you stay?
I answered a classified ad in the newspaper (remember those?) for a part-time box office ticket seller in the summer of 2000. I’ve had many roles: I was the Box Office Assistant Manager; Front of House Manager; Director of IT, Digital Marketing Manager, Director of Marketing, and currently I’m the Director of Marketing & Communications. On July 27, I celebrated 20 years working for The Music Hall!

The reason that I’ve stayed so long is that I’ve continually been challenged, engaged, and inspired by the work, my colleagues, and the organization. I’ve been encouraged to foster new talents (as the list of jobs I’ve had here shows 😀), and I’ve had the creative license to run with an idea and a truly amazing team of folks that are always ready to nurture ideas into reality. 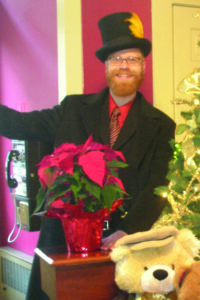 You’re the “Mayor of The Music Hall,” what does community mean to you and the Hall?
A theater is of and for its community. Without a community to support it, a theater withers, and so does the community. The Music Hall started out as a Vaudeville house bringing the greatest acts touring around the country. It also hosted debates, lectures, the sixth-grade play, and high school graduations. Over 140 years on, we are still embracing that role.

There is a need and desire for us as humans to gather together. While at this moment that is difficult, we are hard-wired to want to share experiences and hear stories, see ourselves represented on the stage or the screen. We come together to be entertained, to find joy, and connect with friends (old and new). We may want to participate in a common cause, to be inspired, to be challenged.

The Music Hall is a community greatroom, a place for the exchange of ideas. I see it as essential for us to provide a safe space to have hard conversations and broaden our individual experiences, to look closely at long-held beliefs, and grow as a community, together.

Your desk is covered in tech and gadgets and cool stuff; what part does technology play at a historic theater and what do you see for the future at the Hall?
Theaters have always wanted to embrace new technology. Whether it was electric lights versus gas, movies on film to movies on hard drives, air conditioning, creative staging, or innovative productions. At the same time, theater is steeped in tradition and superstition—don’t whistle or mention the name of The Scottish Play.

Technology underpins everything we do, from the lights and sound to streaming video, working remotely, and selling tickets. But that analog experience of being in the room, of seeing something live and unfiltered by a screen is irreplaceable. And we must tend to that as to a precious and fragile thing.

What is your favorite backstage moment/ favorite moment at the Hall?
It’s hard to pick just one. Over twenty years and hundreds of performances, I have met so many legends backstage. I watched Madeleine Albright play the drums. I ate dinner with The Blind Boys of Alabama. I basked in the presence of John Prine, Aimee Mann, Tony Bennett, and Babatunde Olatunji. I listened intently to stories told by Neil Gaiman and Justice Sonia Sotomayor. I hung out with Stephen King, Joe Hill, Dan Brown, and Margaret Atwood all at the same time! I laughed with Trevor Noah and Maria Bamford, and I stumbled over my words with Whoopi Goldberg. I was blown away by Taiko Drummers, Buddy the Elf, and Seven Fingers of the Hand, but perhaps my all-time favorite fanboy moment was when I got to introduce Steve Martin. He has always been one of my heroes. His ability to seamlessly integrate the personas of goofy comedian, museum curator, playwright, and banjo virtuoso into this Renaissance man is an inspiration (there’s hope for me, yet).

He was to appear with Edie Brickell and the Steep Canyon Rangers. They had a heck of a day. Their bus broke down three times. They were late and they still had to soundcheck. So, the audience – a full house – was left waiting on the street. Finally, the audience was in. The air backstage is frenetic. I say a quick hello, but mostly try to stay out of the way. Steve sticks to the green room. I keep my intro short, but get some laughs with some ad-libbing about the situation and do my patented two-step. He is standing just off stage when I exit. He must’ve seen the surprise in my face. He says, “Nice job out there, thanks for warming them up…not even one tomato,” he flashes a big smile and sticks his hand up to give me a fist bump. I look at him quizzically but bump fists. “Finger picks,” he says wiggling his fingers and then he leaps past me to go on the stage to a standing ovation. The first thing he says to the audience is, “Thanks for bearing with us, you know banjos are notoriously hard to tune.” And just like that, he had them in his hand, and I stand in awe of his presence both on and off the stage. He’s funny and amazing. He goes on to put on one heck of a show. He could have been a diva, he could have canceled the show, but he led with a light, grace, and joy that has left an indelible mark on me.

You serve on multiple committees at The Music Hall, attend shows and member events regularly, you’re on the board of the Chamber Collaborative, End 68 Hours of Hunger, an organizer and once a grand marshal of the Portsmouth Halloween Parade, you are on the Portsmouth 400 committee, AND you’re a co-host of CreativeMornings PKX—what keeps you going and where do you get all that energy from?
Lots of coffee. My mom would tell you that I finally found a creative outlet for all that frenetic energy.  Seriously though, most days it doesn’t feel like work. I get back way more than I give. I am proud to represent The Music Hall in lots of ways in the community and to have passion projects outside the Hall, too. I feel the need to give back. I get excited about ideas, projects, or events that tap into something that is core to us as human beings. Also, when you are a person that other people see doing things, they often ask you to do another thing. I tend to say, yes.

In the many years that you’ve worked at The Music Hall, what has been one of your proudest achievements?
Fill the Hall. Without a doubt. Denise Wheeler, a friend and fellow rabble-rouser, came to me and pitched an idea to use the theater for a food drive. We had done food drives in the past, “bring canned goods to any show this month and get a movie pass or a discount.” That had seen varying degrees of success. Sometimes we could get enough to fill the back of a truck. One year, we couldn’t fill even one basket. I knew we could do better.

What Denise suggested was completely different. We would hold an all-day event, inviting people to come put a bag of groceries on a seat. Without hesitation, I said, “Yes, we’re doing that!” Then, I said, “I should probably talk to someone else about it, but we’re in!” And so a collaboration was born between The Music Hall and Gather. Lots of hard work and thought from both teams, loads of volunteers, and a massive community turnout all go into making that event happen.

That first year we got five tons of food, this June we got 26,000 pounds of food and $75,000 in cash donations for Meals 4 Kids, Gather’s summer meals program which is feeding more kids for longer through the pandemic. It is truly an inspiring event, and it highlights that even here, in the affluent seacoast community, there are those who don’t know where their next meal is coming from, and no kid should dread summer vacation because they don’t know if they can eat.

This event embodies the principles and values that this organization is based on and that have helped me build a life here at The Music Hall.