Celebrate Juneteenth with Us! 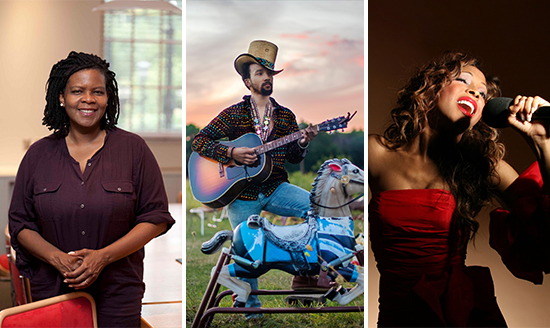 Join us tomorrow on June 17 to get in the groove for Juneteenth with Dwayne Haggins, who has been dubbed the “John Legend of rockabilly.”  We had so much fun when Haggins came last year at his LUTA show and we can’t wait to see him back on our stage!

We are so excited to be collaborating with the Black Heritage Trail of NH (BHTNH) again for the celebration of Juneteenth on Friday, June 18, which will surely be awe-inspiring!  Live at the Historic Theater, N’Kenge will be performing a wide variety of songs and readings that will leave you feeling good!

N’Kenge is an international award-winning singer and performer with a musical range that spans 11 languages and includes genres that stretch from opera, gospel, and jazz to pop and musical theatre. She was called “Electrifying” by the NY Post in the role of Mary Wells that she originated in Broadway’s smash hit Motown: The Musical. She was recently seen on national TV singing the National Anthem at Madison Square Garden and will be returning to Broadway this fall in the role of THE MOON in the revival of Caroline, or Change.

The Black Heritage Trail holds four major events/programs annually to help celebrate and highlight the history of African-American culture in New Hampshire. This year’s Juneteenth theme is “Found Lineage: Celebrating African-American Roots and Branches,” which will include a concert, a workshop, keynote address, and Ancestor Reverence Drumming and Dancing. And later on July 3, the BHTNH is once again collaborating with community leaders around the state to bring people together and to read from Fredrick Douglass’ historic speech on protest and to reflect on its meaning.  The hope is to open the doors to have these difficult conversations and an opportunity for deeper dialogue.

For more on the Black Heritage Trail of New Hampshire’s Juneteenth programming or to donate to the organization, visit their website here.

For more info on our Juneteenth line-up, click here.