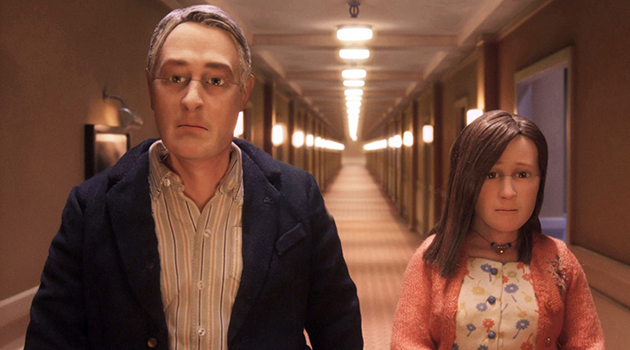 Anomalisa is the story of Michael Stone, the author of a business self-help book about client service. He’s in Cincinnati to do a keynote convention speech about the book and he’s feeling a bit alienated from the world. (If you’ve ever done this kind of one-day business travel, you probably know just how he feels.)

Stone’s anomie/depression/alienation is obvious to us because everyone else in the film has identical faces and identical voices. [metaphor alert!]

Then he meets Lisa. She has her own face and her own voice and Stone is fascinated and curious and driven to find out who she is and to get to know her. And he does.

Maybe this is the right moment to remind you that Stone and Lisa and every other character in the movie are all played by puppet figures, animated in stop-motion. This is important, because while we have seen plenty of motel-room, getting-to-know-you movies (like Lost in Translation), very few have featured fairly graphic sexual encounters between puppets. [I don’t know whether puppet sex will make it more or less likely that you will attend the screening, but I thought you should know).

Kaufman’s films all touch on the weirdness of how certain people see the world, but the critics—who pretty much all raved about the film—also note that there is a large dose of joy and connection and warmth in Anomalisa. I think that’s important, because films that promise to be about depressed or alienated people are often themselves depressing or alienating. But I don’t think that will be the case here.

Over the years, I’ve learned to be suspicious when one or two critics love a movie that most people don’t. But I’ve also learned that when the whole critical community likes something, it’s a good idea to check out the object of their affection.

So, that’s what I hope you’ll do. Anomalisa will kick off at 7:00 in The Historic Theater, and I’m looking forward to it and the discussion.