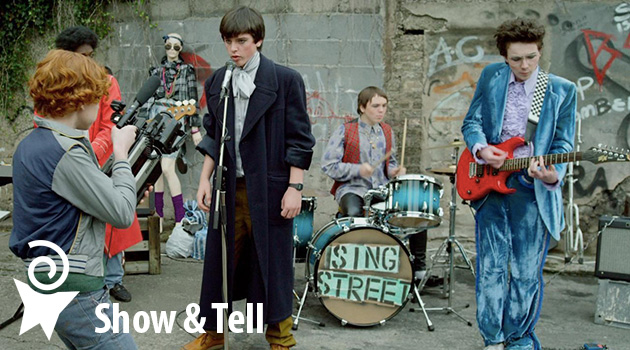 Tomorrow night, we have a great opportunity for some critical triangulation. Back in 2007, John Carney made a little movie about a couple of young Dublin musicians called Once. The movie made a splash at Sundance and went on to bag an Oscar for Best Song and was turned into a Tony winning Broadway play.

That’s a tough act to follow, and Carney took the big Hollywood budget that Once’s box-office success bought him and made a 2014 movie about a couple of young musicians in New York called Begin Again. It didn’t exactly bomb, but despite its big-name stars, it certainly qualified as a sophomore slump for Carney, who vowed never to work with one of its stars ever again. (Come to the discussion and I’ll tell you who!)

Now here’s Carney again, lesson learned about making movies based in New York, with a movie about young musicians in Dublin called Sing Street.  And we get to decide whether this third outing is closer to his first triumph or his second stumble.

My reading of the reviews of Sing Street tell me that the film is charming the socks off of audiences and critics alike. (Charming movies are always a risk, of course. What one viewer finds charming may have another viewer gazing longingly at the exits. In this case, I think charming may be just what a July moviegoer is looking for.)

My money’s on Sing Street, partly because the critics are making the right noises and partly because the film’s premise—a teenager tries to impress a girl with the news that he’s in a band, then has to create a band to make good on the lie—is so in line with what I remember about that period in any young male idiot’s life. A screaming desire to get laid will move mountains … and create bands.

I hope you’ll come to the discussion of Sing Street, if only to set me straight about the appeal of the music of the 1980s, which is when the film (and its music) is set.

Then, you can take out your 1980’s-era Filofax organizers and make a note of the other upcoming discussions this month.

On Tuesday, July 19, we will be looking at Maggie’s Plan, a well-received comedy with Greta Gerwig, Ethan Hawke and Julianne Moore. Then the next week (July 26), we will be talking about Whit Stillman’s film adaptation of Jane Austen’s lesser-known novel Love and Friendship. (I do like me some Austen, and Kate Beckinsale is said to be amazingly good in it.)

Having The Music Hall as an escape from summer politics, deer ticks, and fanatics is a great comfort. I hope to see you there.