“In the Meantime” – Catching up with Leslie Mendelson 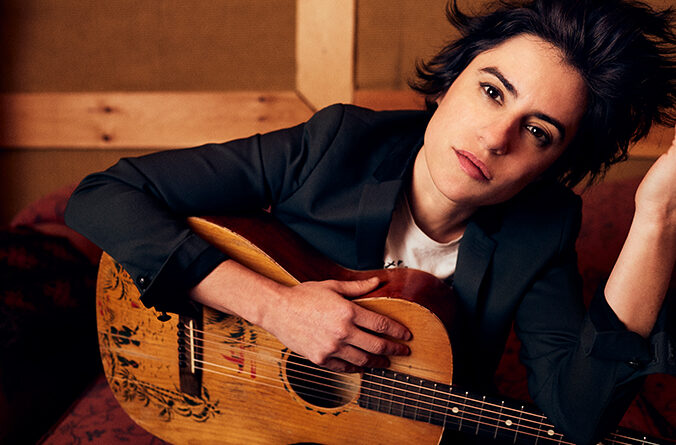 Having worked with legendary artists such as Jackson Browne and The Grateful Dead’s Bob Weir, Leslie Mendelson is quickly rising to stardom. Mendelson has been described as an artist with a “loyal, cross-generational audience that hugs the hippie, hipster, coffee shop and society crowd.” Her timeless singer-songwriter style and musicality is one to watch out for. Mendelson sat down with James Paone, The Music Hall’s Programming Manager. She’ll take the stage with Isaiah Sharkey on August 5 for a special Live Under the Arch event!

So the question that every 2021 interview starts with…How did you spend your pandemic? Writing? Exploring new hobbies?
I did absolutely nothing. Just kidding, well kinda. I definitely didn’t start baking bread or take on any new hobbies besides making cheese plates to go with my happy hour (which started way too early most days). In all seriousness though, I was actually doing a lot of shows over Zoom. We released my album in April and there was surprisingly a lot to do. I was probably doing a live show once a week. It was actually the thing that kept me sane. Not only did it give me something to keep myself busy with but I got to see and connect with people each week. The first time I went live I was in tears … I’m glad I was able to be a little source of entertainment for people.

In the Meantime…pretty perfectly stated for a reimagining of a few recently recorded songs. What was it that drove you to strip down a few of your most recently released tunes? And why did you choose “Lay It All on Me,” “If You Can’t Say Anything Nice…,” and “Speed of Light”?
Having to play the songs solo in my bedroom instead of with a band forced me to rethink the arrangements. I decided on those three because they are important songs on the record. Two of them being singles and one is the title track. When I started playing them solo, they took on a new life and I thought it would be cool to release them this way.

You also recorded a fantastic version of “People’s Parties” by Joni Mitchell. Joni has been everywhere on our news feeds, with the 50th anniversary of Blue. What is it about her and her music that you connect with most?
Joni is a one off. There’s just no one like her. A master lyricist and brilliant musician. Her lyrics are exquisitely honest and full of raw emotion. I immediately connected with her the first time I heard her. Also the way she phrases and uses different tunings kills me. There’s just so much there to learn from. I think she’s one of, if not the greatest songwriter of all time.

Your 2020 album, If You Can’t Say Anything Nice, never got a chance to hit the road. That must have been tough to stomach after investing so much into what really is an incredible artistic endeavor. Such timely and topical songwriting—can you speak to how those songs are still resonating with you now, 15 months after the album release?
I feel like we made a pandemic album before the pandemic even happened so it worked out quite well. Songs about depression, isolation, and political unrest. It felt like we made a record for the times.

I’m a big Deadhead, so I’ve got to ask for a Bobby story. Any wisdom that he shared with you when you collaborated? Or insight into his method? It must have been pretty surreal.
The first time we actually met was when I showed up for rehearsal for an episode of Weir Here. He was super sweet and was into singing around the piano and working on harmonies. I got to request a couple of songs from his catalogue. I really wanted to sing “Cassidy” with him. It’s one of my all time favorites and I knew the harmony by heart from singing it in a Grateful Dead cover band I used to sit in with back on Long Island forever ago. It was completely surreal looking over to Bob and hearing the actual voice I’ve known for so long. That was a “pinch me” moment for sure.

Have you played up in our neck of the woods before? I’m sure you’ve done Boston and I see you’re heading to the Cape after Portsmouth. Anything particular about New Hampshire that appeals to you?
I’ve done a bit of playing up here. Still feel pretty new to these parts but I love the drive up north. The coast is so beautiful up there. I love a nice wharfy town. Coming from Long Island, I always felt like we’re kinda New England, but we’re not.

What do you have in store for us at The Music Hall next month? It’s a pretty unique night with you and Isaiah Sharkey sharing the stage.
I’m so excited to meet Isaiah. He’s a fantastic musician and I look forward to seeing him live. I’ll be singing songs off my albums and the new EP. I’ll definitely throw some of my favorite covers in there as well. I think we’re in for a good night of music!