Telluride by the Sea turns 21! 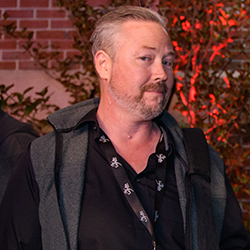 Trevor Bartlett returns as the Telluride by the Sea (TbtS) Loft series’ ringmaster. Chris Curtis, film and outreach manager at The Music Hall, asked Trevor about this little (but huge!) festival we put on.

TbtS is now old enough to drink! What has made this event so successful and running for so long?
Nothing beats the energy of a big crowd as the lights go down on a movie premiere. There’s a magic in sharing the epiphanies and surprises of these stories together. It’s a rush you get hooked on and TbtS just cranks that to eleven. It keeps seasoned audiences coming back year after wonderful year and just blows rookies’ minds.

What film trends are most excited about? What do you hope to see this year?
I’m excited to see how gender roles, parity, and obsolescent power are structures being more closely scrutinized, both in front of and behind the camera. The #TimesUp movement has been a genuine wake-up call to the industry and has empowered a whole new generation of women to speak the truths of their stories like never before. These are important times.

What is your favorite TbtS memory?
One year I talked Bill and Stella (Pence, curators of TbtS) into allowing me to screen a straight-up horror-comedy flick called Severance that was so far off the Telluride map, it circled all the way around and got back on it. The audience was howling, they didn’t know what’d hit them. Bikini girls with guns! At Telluride! So much fun.

What’s your big tip for first-timers?
There will be very few reviews to frame these titles for you. Prepare to ask questions. Plan on shaping your own impressions. Expect to be challenged to defend your opinions. Get ready to have your mind blown. Also, bring an umbrella. The lines form outside.